Queen from Best Bands of All Time 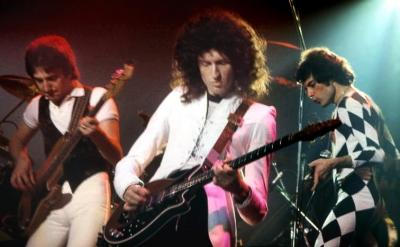 Queen are a British rock band that formed in London in 1970. Their classic line-up was Freddie Mercury (lead vocals, piano), Brian May (lead guitar, vocals), Roger Taylor (drums, vocals), and John Deacon (bass guitar). Queen's earliest works were influenced by progressive rock, hard rock and heavy metal, but the band gradually ventured into more conventional and radio-friendly works by incorporating further styles, such as arena rock and pop rock, into their music.

I respect them as a good act in rock/pop history that inspired legions of other artists. As musicians, they're all great with a lot of talent. But simply their style don't match my musical tastes. What can i do about that? I don't like them. But even so, they were great.

Say what you will about Queen, but Brian May's guitar playing alone makes them one of the best bands of the 70s. His tone is masterful. There's a certain cheese-factor to Queen, but much of the early 70s was ridiculously cheesy and completely over-indulgent. I prefer the 3 album run of Queen II, Sheer Heart Attack and A Night At The Opera over the later work.

Great band. I'm still listening to their albums trying to past listening to just their hits and find some good tracks people don't talk about much. Bohemian Rhapsody is easily one of the best songs of the past 60 years of rock & roll history.

While the group’s style didn’t evolve too much over the years, apart from to remain in step with prevailing trends, they always presented a fair bit of diversity; of the two dominant writers, Mercury tended towards show tunes and May tended towards hard rock, while Deacon and Taylor had less distinctive styles and wrote in more of a pop/rock vein. This approach to writing meant that the group’s albums tended to be incoherent; most of the time it feels like they’re writing to have something to write music to, rather than communicating anything particularly heartfelt or profound. Because of the range of writers, lyrical subjects and styles, none of their albums hang together perfectly. But that’s the negative side; the writers all had a good sense of melody and a distinctive palette of sounds to work with, and their albums almost always have a handful of really good songs – few other groups with a twenty year tenure have such an even distribution of radio hits throughout their discography, as radio listeners are just as likely to be acquainted with ‘Killer Queen’ from 1974 or ‘Bicycle Race’ from 1978 as they are with ‘A Kind of Magic’ from 1986 or ‘The Show Must Go On’ from 1991. And their albums strike a nice balance between innovation and accessibility; even though some of their material could be categorised as progressive rock or metal, they’re not difficult for casual music listeners to grasp.

Great instrumental habilities (including voice), profesors of rock as some say. For me they became less innovative as they popularity grew, until the final albums. Singles band for the most part, 'cause they have hidden gems as well, and most of their albums is worth listening anyway.

You can tell that if they really tried, they could have made amazing albums. But they didn't. Ah well, RIP Freddie Mercury

So... I like Queen as a singles band. Their best of kinda stuff is alright, some amazing and some ok. I love Brian May's guitar playing and Freddie's voice is awesome, but the music becomes mediocre. I am in the middle of listening to their albums and how they are ranked on this site. On number seven, which at this time is Innuendo. That album just reminds me of the butt rock I hate, but then there are some singles that would make me want to put them in my top maybe, let's say 20-30 bands...

People can hate this band as much as they like to just the same way as I love all their post-"A Night at the Opera" albums regardless of how much garbage these albums are supposed to be. A singles band, yes, but definitely also an album band.

Two prototypes for every other band to follow: Brian May as the sublimely talented guitar god, and Freddie Mercury as the dramatic, charismatic front man. Both used to measure all others.

Completely agree with the comments about Freddie being probably the greatest front man in history. I wasn't always convinced by the music but you cannot deny the showmanship that went into every performance. I has the privalege of seeing them in the late '70's. Spectacular doesn't cover it. Freddie was a true great & what a voice.

Queen were one of those bands that were totally unique, they never sounded like anyone else but themselves. They had incredible songs, especially the singles, but there were some fantastic album tracks too. Bohemian rhapsody, Killer queen, Another one bites the dust, and, somebody to love, are all classic singles, but there's also, '39, Get down, make love, Jealousy, It's late, and, I'm in love with my car, all great album tracks. Queen never took themselves too seriously and their relationship with their fans was always very important. All four members contributed great songs to their records and their videos, especially in the eighties, were always a lot of fun. Queen were one of those very few bands that crossed over into all genres, everyone likes at least one Queen song. They may not be thought of as cool, and they may have veered a little too close to commerciality in the second half of their career, but they were always entertaining and superb live as their amazing show at Live Aid shows us. There will never be another band quite so brilliant, unique, and bizarre again. A great band.