THE BUFFET AT WYNN LAS VEGAS from Best Buffets in Vegas 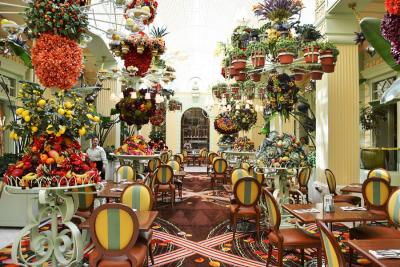 The Wynn’s buffet, (officially called “The Buffet at Wynn”) is beautiful. And that’s BEFORE you see the food. It’s high ceilings, elaborate flower displays, crown molding, soft red awnings, and open atrium with marble flooring gives it a décor and atmosphere unlike that of any other buffet in Las Vegas. When dinning under the Wynn Buffet arched atrium ceiling, you can almost imagine you’re seated in another Steve Wynn creation: the Bellagio Conservatory. Already a visually-pleasing experience, the Wynn Buffet was completely renovated in late 2015. It’s nearly always ranked as one of the top three buffets in Las Vegas.