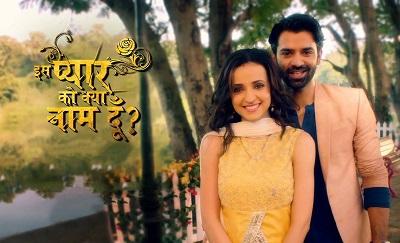 Iss Pyaar Ko Kya Naam Doon is a star-crossed love story presenting an interesting contrast of personalities entwined in a relationship swinging between love & hate. Khushi and Arnav have diametrically opposite ideologies. If Khushi believes in means, Arnav believes only in ends. Khushi's relationships are the most important to her, whereas Arnav believes all people come with a price and can be manipulated for one's benefit. Khushi, an 18 year old from UP, is simple, rooted in family and is driven by a clear moral compass. She stands for what she believes in, and never lets go of her inculcated values. She will not change herself to conform to people's shallow expectations. In stark contrast, Arnav is a 28 year old self made, ruthless, 'win at all costs' man who believes everything can be bought in the world, including love. He has no consideration for relationships and no qualms for using & manipulating people as pawns to achieve his ambitions. As the story progresses, their love-hate relationship witnesses a series of dramatic conflicts. While Arnav constantly tries to break Khushi's steadfast morals just in order to prove to himself that he can control everyone; Khushi on the other hand, tries to always follow her values & morals.