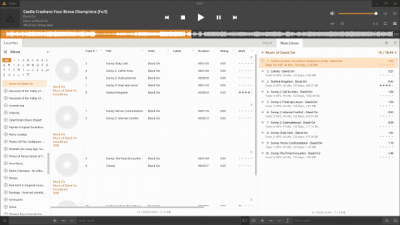 I was a Spotify user for a long time, then recently switched to Google Play (because of brand loyalty, I guess, I like Google's direction, or did until they started trying to cram Google+ down my throat but that's another thread.) I use the subscription service because if I want to listen to Styx last night and Social Distortion tonight and tomorrow night I feel like Oliver Mtukudze I don't have to hunt through a library looking for it, I'm not limited by what I already have, and I don't have to hunt it down somewhere to buy it, especially when I'll probably not listen to those cuts again for a year. If someone says "hey you gotta check out so and so" I can listen to some so and so and if I like it listen to some more and if I don't forget about it. The interesting thing about the subscription services is that the obscure stuff is mostly there, what's missing are the classic catalogs, like Zep or AC/DC, that still make bank. I can live with that, I can hear that stuff just by turning on the radio in the car. There's another reason, though: I play in a band. When someone says "hey let's learn Downhome Girl by Old Crow Medicine Show" I don't have to go "huh?" I just dial it up on Google Play and learn it. Granted you can use YouTube for that in most cases (and that's where I turn if something's missing from Google Play) but YouTube requires some futzing to find a good version to listen to. Spotify did to some degree as well, I find Google Play to be superior in that regard.

I still buy/download music because the amount of crap music out there. Using Pandora or the like you still have to listen to the crap. With my own music I just make playlist after playlist. I probably have 100 playlist to use depending on my mood or activity. I use Pandora for parties or when I want a wide mix playing in the background. I'm not against streaming apps or trying to put them down, I just prefer my own music.

If tomorrow the license agreement between Google Music / Spotify / Rdio... change and some songs disapear from the catalog, I won't be able to listen to them any more, even though I could listen to them today. If the license agreement changes "in the physical world", no one will come into my house to take my CDs / audio files to stop me from listening to those songs. As for the sound quality, when I'm driving and listening to music on my decent car stereo, yes, it's kind of the same to have a lossless file on my phone, or to stream the same from GMusic. At home, with fine audio components, it's a VERY different story. This is not pretentious audiophiliac Kool-aid; when the weakest link in your system is the quality of your source, you can actually hear the difference. I won't frown upon streaming services. I am quite happy that Google Music is now available in Mexico (about time, guys!). But I don't think I'll give up my private collection any time soon.