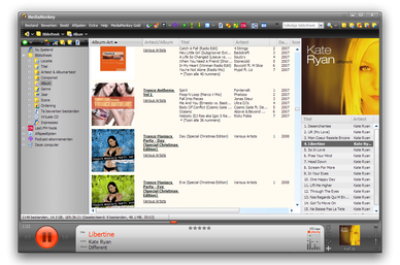 MediaMonkey for Windows (sometimes noted as MMW) is a digital media player and media library application developed by Ventis Media Inc., for organizing and playing audio on Microsoft Windows operating systems. By using plugins, it can be extended to handle video and other media formats as well.

I pay for Spotify, but it doesn't let me rate songs, track play counts, or create smart playlists. I can't even see which songs I have listened to. When you have 1,000s of songs, you need more than just a star or not star system to sort of boil off the stuff you never want to hear again. As much as I think iTunes is the worst performing app ever written, I like being able to buy a few albums, listen to 100 songs, rate the ones I never want to hear again as low, and then use smart playlists to only listen to highly rated music. In Spotify, this requires a lot of work.

I live in the Bay Area, and my employer pays for my AT&T phone. AT&T is crap in the Bay Area, and I frequently can't stream anything. When I get out of the BART tube, I usually can't get a decent signal for at least 5 or 10 minutes (and by then I'm underground again). When I go on vacation, I frequently go to places with no connection at all. So, I subscribe to Pandora. I also buy music and convert to MP3 to upload to my phone and save to the USB drive in my truck. Also, I may be older than the average Lifehacker reader, and my musical tastes don't change as much as they used to. Much of the music I listen to now, I've been listening to for years. I don't buy much new music, because well... get off my lawn.

The way copyright laws in the US are, even if you purchase music, you still are just licencing it. I only download what isn't available on Spotify or Google Music. And when I do, I add it to Google Music so it's stored in the cloud and accessible everywhere. The sound quality is as good as it would be if stored locally as long as it's over a good connection, and if I'm worried about connection quality, I can just make it available offline ahead of time. I have a HUGE collection of music and I've lost the whole thing and had to rebuild it before. Even with multiple backups, it's a waste of storage and still doesn't provide the security of having it in the cloud.

I live in Chicago and have limited capability to stream music when I'm on the go. I primarily use my mobile to listen to music when on the el or bus, but my carrier (Sprint) is awful (as they all are). I can barely access basic Internet pages let alone reliably and consistently stream music. I can't even listen to music stored in iTunes via the cloud on my mobile. If this is the situation in a major metropolitan area, I can imagine that anyone in suburban or rural areas or those without access to stable broadband with unlimited amounts of data downloading would have their reasons as well.

I live in the country. My internet is reasonably fast, but if someone in the house is trying to play Warcraft while I'm streaming anything, my streaming creates a lot of lag. Also, I like to own my music without worrying about whether this service or that is going to go away. While it seems unlikely that Pandora or Spotify will ever close, I like the relative security of having MP3 files (or even actual physical CDs *gasp*). I haven't listened to the radio for years because I hate commercials and I hate not having control over what music I listen to. Sure, sometimes while I'm at work I'll pop on Pandora or Spotify so I can discover new music or because I'm in the mood for listening to a kind of music or an artist I don't own, but in general I don't like being at the whim of whatever algorithms those services use, just like I don't like being at the whim of a DJ. I know I could spring for a paid subscription to those services, but that's not an expense I want to have right now. So all those reasons add up to me still buying music as opposed to exclusively using Pandora or Spotify. :)

Google Music All Access lets you save locally to mobile devices (Android, and I think also iOS; don't know about WinMo). My main use for the service is to generate a radio station, then "Save Queue" and "Keep on Device" so I have music for the car. You can save any song or album in their library the same way. I'm pretty sure Spotify premium lets you save albums locally, too.