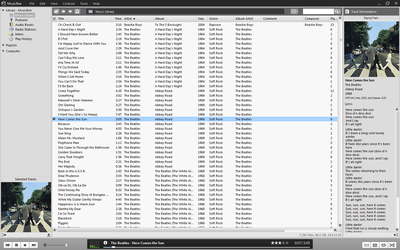 I like controlling my music. I don't want to be told that when I want to listen to a specific artist or song, I have to listen to these other artists or songs on the off chance that I'll be able to listen to what I want in an hour. I don't want to be interrupted by a commercial when I'm listening to my music, either, especially since I tend to skip songs constantly until a song pops up that suits my current mood. And sometimes, during those skips, I'd like to go back to a song I passed by mistake or listen to a song on repeat for an hour and a half; can't do that with pandora.

Here's an interesting argument, posed by Bruce Willis, of all people. he's actually taking Apple to court over this one. He says he's spent over $10K on iTunes over the years and he feels that since he spent the money, he should be able to pass his music library on to his kids when he dies, just like a physical asset. Apple argues that his library is his and cannot be taken over by anyone else. EG: He hasn't actually purchased anything more than a personal license. When he dies, the license expires and no one else is allowed to access the library, even if it's physically stored on a computer or other device. This just doesn't sit right with me.

"The Google Play music player is currently available in select territories." :( Does it allow for storing in a DMR-free format that I could play on anything else than my smartphone/computer? I really do prefer using a media player when on the go. Having to pull up my phone to switch tracks / play / pause, etc, is to me an annoyance. As well as the mentioned phone battery consumption.

I fall somewhere In the middle... I buy the music because I want to own it... but then I listen on Spotify and/or Google Play Music. Haven't listened to my own CDs or actual MP3s in years.

I'm with you here. I've trashed all my mp3's and cd's and only keep the vinyl in the basement for sentimental reasons. The thing I like is not owning lots of stuff, the less i have on my computer or shelfs the less worry I have. And more importantly, not owning music i get to constantly search for new music and discover new things as fast as I can think it. My taste in music changes a lot anyway so streaming fits me perfectly.

Streaming services are great for many things, but you're at the mercy of their available selection. It's why people sometimes watch bad movies on netflix: because they've seen everything good and there's nothing else left (they might still enjoy those bad movies, but I believe this reasoning is still present). If you know what you want to watch/listen to, dealing with a streaming service can be irritating. When you download your own music you can manage it how you choose.