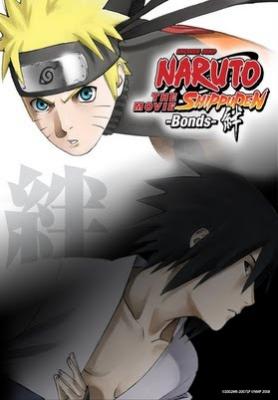 Naruto Shippuden the Movie: Bonds (劇場版 NARUTO−ナルト− 疾風伝 絆 Gekijōban Naruto Shippūden: Kizuna)[1] is a 2008 Japanese animated film based on Masashi Kishimoto's manga and anime series. Released on August 2, 2008, it was announced in Weekly Shōnen Jump along with the DVD release date for the first Shippūden film. Additionally, the teaser trailer for the second film aired with episodes 40 and 41, and again with episode 66 and 67. In episodes 70 and 73 the opening sequence was replaced with footage from the film. Its English version was released on DVD and Blu-ray on October 25, 2011 in North America. The film's theme song "No Rain No Rainbow" is performed by Home Made Kazoku.