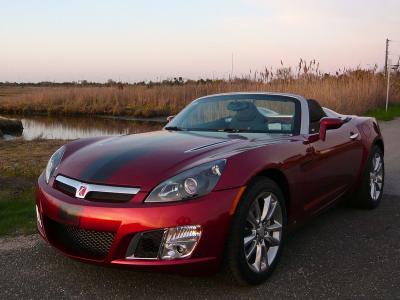 he Saturn Sky is a roadster that was produced by Saturn, and was initially released in the first quarter of 2006 as a 2007 model. It uses the Kappa automobile platform shared with the Pontiac Solstice and Opel GT. The Sky concept was shown at the 2005 North American International Auto Show, with the production version following at the 2006 show. It was built at GM's Wilmington, Delaware plant, alongside the Solstice and the Opel GT. The Sky featured 18-inch (457 mm) wheels and a 2.4 L Ecotec LE5 straight-4 engine that produced 177 hp (132 kW), a new straight-4 2.0 L turbocharged direct injected engine that made 260 hp (194 kW) as well as an optional dealer-installed turbo upgrade kit that made 290 hp (216 kW). Both five-speed manual and automatic transmissions were available.