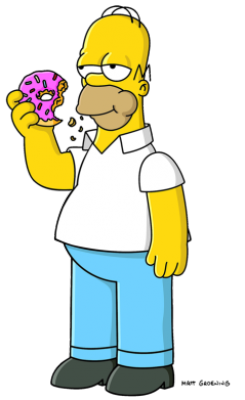 Homer Jay Simpson, Sr. (born March 12, 1951.), also known as Homer Samson, Homie, Home-boy, Colonel Homer, Dancin' Homer, Homer Thompson, Max Power, Cornelius Talmadge, El Homo, and The Pie Man, is the protagonist of the show and the spouse of Marge Simpson and the father of Bart Simpson, Lisa Simpson, and Maggie Simpson. Homer is overweight, lazy, and often ignorant to the world around him. Although Homer has many flaws he has shown great caring, love, and even bravery to those he cares about. He served as the main protagonist of the TV series and the 2007 film.