Three Days Of The Condor (1975) from Best Spy Movies 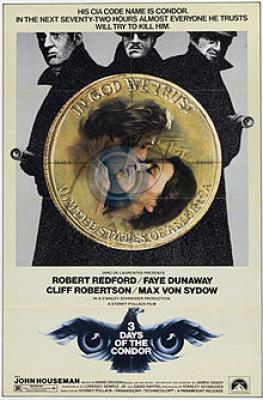 Three Days of the Condor (stylized on the poster art as 3 Days of the Condor) is a 1975 American political thriller film directed by Sydney Pollack and starring Robert Redford, Faye Dunaway, Cliff Robertson, and Max von Sydow. The screenplay by Lorenzo Semple Jr. and David Rayfiel was adapted from the 1974 novel Six Days of the Condor by James Grady. The main point of variance from novel to film lies in the presentation of the CIA. In Grady's book, a rogue element within the Agency is motivated by drug-running greed. In the film, the same individuals act with equal ruthlessness to hide a project intended to protect long-term national interests.