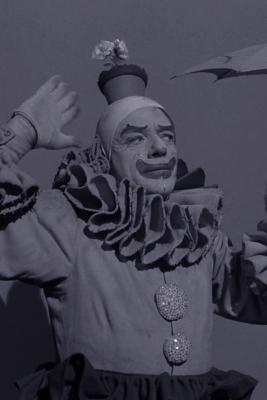 "Five Characters in Search of an Exit" is episode 79 of the television anthology series The Twilight Zone. It originally aired on December 22, 1961. A uniformed U.S. Army major wakes up to find himself trapped inside in a large metal cylinder, where he meets a hobo, a ballet dancer, a bagpiper, and a clown. None of them have any memory of who they are or how they became trapped. The major, being the newest arrival, is the most determined to escape. He is told there is no way of either breaking through or climbing up the cylinder. The major's questioning reveals that the characters have no need for food or water.