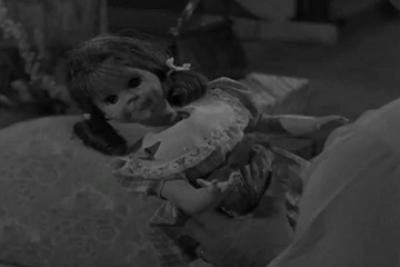 "Living Doll" is the 126th episode of the American television anthology series The Twilight Zone. Annabelle buys her daughter, Christie, a wind-up doll named "Talky Tina" which says "My name is Talky Tina and I love you" in order to comfort Christie. Annabelle has recently remarried to an infertile man named Erich Streator. Frustrated at his inability to have his own children with Annabelle, Erich is hostile toward Christie. Annabelle tries to persuade him that if he gives himself the chance, he will be able to love Christie. When Erich winds up with the doll, it repeats its usual phrase but substitutes antagonisms such as "I don't like you" for "I love you". At first, Erich blames the manufacturers. However, when the doll later begins engaging him in more elaborate conversation, he comes to the conclusion that Annabelle is playing a trick to get back at him for his treatment of Christie. He places the doll in a trash can in the garage, but then receives a phone call and hears the doll's voice threatening to kill him. Checking the trash can, he finds it empty. He confronts Annabelle, but she pleads innocence and it occurs to Erich that since she was upstairs putting Christie to bed, she could not possibly have made the phone ring.