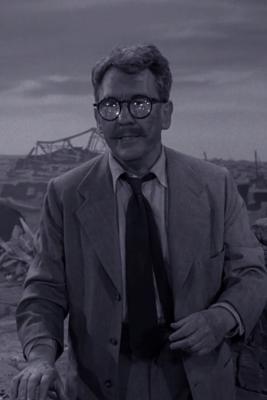 "Time Enough at Last" is the eighth episode of the American television anthology series The Twilight Zone. The episode was adapted from a short story written by Lynn Venable (pen name of Marilyn Venable). The short story appeared in the January 1953 edition of the science fiction magazine If: Worlds of Science Fiction about seven years before the television episode first aired. "Time Enough at Last" became one of the most famous episodes of the original Twilight Zone and has been frequently parodied since. It is "the story of a man who seeks salvation in the rubble of a ruined world" and tells of Henry Bemis /ˈbiːmɪs/, played by Burgess Meredith, who loves books, yet is surrounded by those who would prevent him from reading them. The episode follows Bemis through the post apocalyptic world, touching on such social issues as anti-intellectualism, the dangers of reliance upon technology, and the difference between aloneness (solitude) and loneliness.