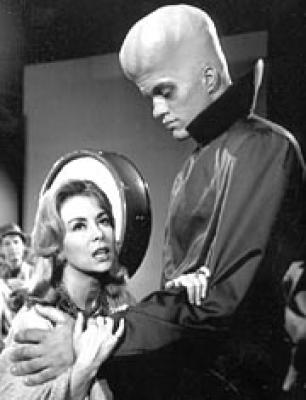 "To Serve Man" is episode 89 of the anthology series The Twilight Zone.[1][2][3][excessive citations] It originally aired on March 2, 1962 on CBS. The story is based on the 1950 short story "To Serve Man", written by Damon Knight.[4] The title is a play on the verb serve, which has a dual meaning of "to assist" and "to provide as a meal". The episode is one of the few instances in the series wherein an actor breaks the fourth wall and addresses the viewing audience at the episode's end. The episode, along with the line "It's a cookbook!" have become elements in pop culture.