Guns N Roses from Greatest Rock Bands of All Time 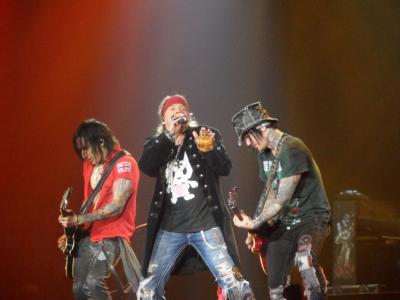 great debut album, after that a bit hit and miss....

This was my first favorite band! Appetite for Destruction is one of the best and most important rock albums ever. Slash gets a lot of hate from people because he says yes to everything and is so mainstream but his playing is just that tasteful. The band remains today (just Axl Rose) is a joke. It's just a cover band honestly. The band was over a long time ago.

A band that burst onto the scene, burning with an intense flame, then burnt out. Too many egos. But for a brief while, they ripped apart hair metal and restored order to hard rock. Appetite is a landmark.

Axl is an idiot, Slash was only good thing about them. Appetite was great, should have made UYI's one great album instead of 2 avg.

I wouldn't skip "Democracy". It sounds like a like a lot of work went into each song...mayby not 15 years...but...well. Its still really good...a mix of Appetite and Illusion.

Great first album. Appetite truly kicked ass. It was also fresh and creative. After Appetite For Destruction they had a few good songs but no good albums. Axel has a good voice and Slash is one of the best guitar players rock music has ever seen, but the band didn't know where to go after their initial success. They ended up putting out shitty work.