Led Zeppelin from Greatest Rock Bands of All Time 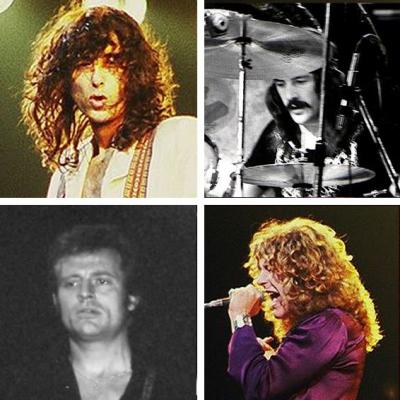 Led Zeppelin were an English rock band formed in London in 1968. The group consisted of guitarist Jimmy Page, singer Robert Plant, bassist and keyboardist John Paul Jones, and drummer John Bonham. The band's heavy, guitar-driven sound, rooted in blues and psychedelia on their early albums, has earned them recognition as one of the progenitors of heavy metal, though their unique style drew from a wide variety of influences, including folk music.

Brilliant musicians, consistently strong albums, and a phenomenal live act (when they didn't screw up). One of my favourites growing up, they lose points for their shameless (if somewhat overstated) plagiarism that dogs their early albums.

The best pure Rock band period. There is no debate. Sorry Stones fans. Zeppelin didn't try and match the Beatles or anyone else album for album and fall short in most cases. They are so much more than just their 5 or 10 mega hits, Each album has some great songs that any fan of rock & roll can appreciate.

Huge under every point of view, one of the greatest and more influencial band ever.

When I put a led Zeppelin album on I feel like the air is sudenly heavier, they're dark and mysterious, very bluesy. They're music has an effect on me. It's like falling head first into a vortex. When the album is over, it's like waking up from a great dream. No other bands can do THAT !

Favorite artist of all time. Other artists have one or two good albums, then fade into obscurity. Zeppelin made a career out of writing good albums, and that is not even taking into account their live albums. Certainly worth a try if you haven't heard them yet.

t's not so much the albums that I love them for, it's just their indvidual songs. Because no other band in history has been able to create a catalog as vibrant or as driving as Led Zeppelin. Oh, and then there's the riffs. And the guitar solos.

Inventors of hard rock and one of the greatest bands ever. There isn't much more to say.

God bless the Holy Quartet!!! He learned what is real ROCK!!!

Mega talented. Incredibly consisitent. Greatest band ever in my opinion. Bowed out with dignity instead of flogging a dead horse like some other British rock bands.

Mega talented. Incredibly consisitent. Greatest band ever in my opinion. Bowed out with dignity instead of flogging a dead horse like some other British rock bands.

Fantastic music and very influential. Hard Rock and Metal wouldn't have turned out the way it did without these guys. Plant, Page, Jones, Bonham... I salute you.

Some of the greatest plagiarists in the history of music. They had great taste. It's a shame they seemed to fail to credit the original songwriters of many of their songs. Zeppelin's versions were usually pretty incredible.

I am not a huge fan of this band. Jimmy Page is an excellent guitar player and Robert Plant is a good frontman. Certainly a talented and influential band but not my style I guess.

One of the greatest of all time. Definitely deserve to be in the top 5 on this site.

Greatest Blues cover band of all time, because their hard electrified take on it became something of their own. Too bad they stole riffs instead of just covering them. Am I insinuating that Led Zeppelin was worse than the Stones in that respect?? YES. The Stones probably did steal quite a lot but they usually gave blues musicians credit when due. The only major Led Zeppelin song with a blues man credit is You Shook Me, what a load of shi*