Metallica from Greatest Rock Bands of All Time 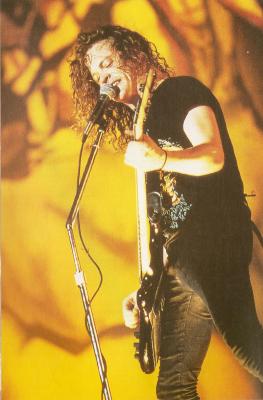 They are a great band and I love a lot of their songs, and I am sure some people would consider them their favorite metal band ever.

Too many ups and downs for me to give a consistent rating. At their best, groundbreaking metal. At their worst, pretentious morons who play the most pathetically stereotypical metal you can imagine.

My first musical love... oh Metallica. I wouldn't be the person I am today without you. This band has gone through a lot of shit with the whole "selling out" business. Maybe they did.. but who cares? They contributed more to the metal genre than any other band, except of course Black Sabbath... and arguably Van Halen.

ey just stopped in the mid '90s, Metallica would have gone down as the greatest metal band in history. However, they were determined to ruin everything they had worked for.

Solid thrash metal. Influential and interesting. They're not exactly virtuosos of course...but they were lightyears ahead of many of their metal contemporaries in songwriting.

Metallica took metal to the masses. Their 80s output is more pure metal, and more impressive instrumentally, but their 90s output is more accessible. There's a reason the Black album rates so high - it's a great listen. I'd agree that they've declined since then. St. Anger was forgettable.

Taking into account only their glory days (first five albums), which is all anyone should get into, they were a really fantastic band. I mean, sometimes I put them on and try to listen ironically, but I just wind up getting super into it.

Posibly the definitive metal band by the end of the 80's, they created the speed/agressive combo that has been the characteristic of metal since. If only more of their albums were like their first 4... anyway, 'til the early 90's they were untochable, but they jumped the shark and became a parody of themselves.

Best metal band ever. It's a shame that they have release rubbish like St. Anger.

Metallica had one the most unreal stretches of albums ever, rivaling the likes of The Beatles, Led Zeppelin's first 6 records, and Stevie Wonder's entire 1970's catalog. Though after that, the main bright spot is Death Magnetic which is hard to listen to for more than 10 minutes at a time due to it's mixing. Still, Metallica is one of the most legendary and groundbreaking groups to ever live.