Pink Floyd from Greatest Rock Bands of All Time 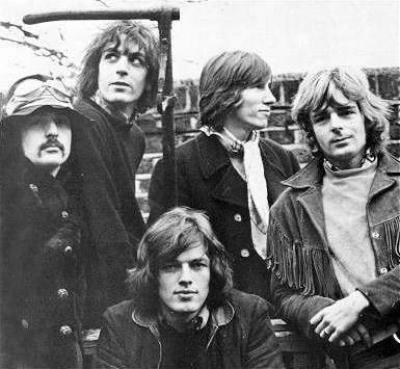 Pink Floyd were an English rock band formed in London. They achieved international acclaim with their progressive and psychedelic music. Distinguished by their use of philosophical lyrics, sonic experimentation, extended compositions and elaborate live shows, they are one of the most commercially successful and influential groups in the history of popular music.

Pink Floyd transcend time. They are the human condition summarised in musical form. Can be over-indulgent at times though their many many fantastic albums make up for that.

Pink Floyd is my favorite band, and one of only four bands I gave a perfect rating to. (The others are Led Zep, The Beatles, and The Stones.) Their catalogue isn't perfect (whose is?), but in their prime they had three very talented songwriters contributing to music never heard before or since, music of a very high level of creativity. The period between Atom Heart Mother and the Wall was especially fruitful, with every album (except perhaps Ummagumma) another solid brick in the wall of their legend. A lot is made of the friction between the band members that eventually split them apart, but they (like The Beatles) were at their best when everyone was contributing equally. No one can move me like Floyd, and I'm fairly sure no one ever will.

Pink Floyd had and has no peer. Even their early, somewhat inaccessible music (Atom Heart Mother, Ummagumma) becomes a real treat if you take the band's journey into account. I saw them live in 1988 here in Oz and they are still the best live band ever. Odd that Radiohead is above them in the Band's rankings...

Pink Floyd really revolutionized music in general and especially progressive rock. His start in the Psychedelic Rock, his time in the Experimental Rock, led them to make a unique and never before seen Rock, like The Dark Side Of The Moon.

One of the most surprising bands of all time. Ever evolving carrer with much variegated albums. All great musician even though not functioning very well as a band (we all know they hated each other since barret's departure). Clever lyrics with clever music. The only thing they missed was a great singer (sorry gilmour). P.s. Ummagumma one of the must underated albums of all time, The wall one of the most overated (sorry about that, but the only thing i like in it is the concept, another brick in the wall pt 2 and comfortably numb).

If I could only listen to one band for the rest of my life, it would be Pink Floyd. First band I have ever listened to, my dad's favorite band, and the first band my kids will ever listen to

Came to this band late in life for some reason, got into their 60s stuff first, but their string of albums in the 70s are as great as any other artist/group has produced. Intelligent music, but that doesn't mean it's not emotionally powerful at the same time.

When I joined this site, I thought Pink Floyd were a band that you either loved or found dull. Apparently, they're also a band you can hate with passion. I guess it's reasonable enough to call some of their albums/music overwrought and pretentious, but they're, in my opinion, the best band at expressing the human's search for a deeper meaning with life.

One of the greatest bands of all time. The best baptism of a Pink Floyd is listening to Dark Side of the Moon while driving in a summer night in a full moon. Unforgettable forever

I grew up with this group, and their discography is the epoch of 70s music. I've gotta say, things really went downhill after Roger Waters left, which is what keeps me from giving this group a 100. Still, I love what Pink Floyd has done for music, and I'm glad I had them around when I was younger.

My first memory of Pink Floyd was the Wall, still fairly new I would see their name spray painted everywhere and thought they must have some scary bad ass fans. A decade later I'd fall in love with 'Wish you were here' during my early 90's FM radio days, the rest was even better.

I don't look upon Pink Floyd as one band, but as 5 different bands, which is why they have so many albums on my chart. The first band was the brief time period under psychadelic master Syd Barrett, which ran from their early underground days and debut single to "A Saucerful of Secrets." The second band is what I like to call the "lost" Pink Floyd, which ran from "More" to "Obscured by Clouds", both of which were soundtrack albums. The longest time period for the group, this band was a highly experimental group in search of a new leader following the downfall of Barrett. Recording everything from soundtracks to suites of instrumental music, this Pink Floyd had some great moments, but was ultimately forgotten by the next and more accessible band. That third band was what I like to call the "golden age" of Pink Floyd. Recording under a new and brilliant songwriting partnership between lyrical genius Roger Waters and guitar master David Gilmour, this band was the best, most accessible, most popular, and lasted for a tragically short amount of time. After recording three classic albums during this "golden age" - "Dark Side of the Moon", "Wish You Were Here", and "Animals", Roger Waters took over the reins of the group completely and began the fourth Pink Floyd, which was more like a dictatorship than a democracy as the golden age group had been. Despite Waters' ego, this band still managed to turn out two great albums equal to those of the golden age, "The Wall" and "The Final Cut". After the release of "The Final Cut", Waters walked out of the group, declaring Pink Floyd to be "over." The other members, however, rebelled and went to court against Waters for the rights to the Pink Floyd name. One way or another, the remaining group managed to get control of the name, although not all the rights to some of the material Waters had created with the group. Nonetheless, a now Gilmour-led group created two more albums and supporting tours, "A Momentary Lapse of Reason" and "The Division Bell." Unfortunately, both of these albums were horrible and can now be found in the bargain bin of your lcoal used bookstore - Gilmour simply could not write songs to rival those of the group's days with Waters. For this reason, Pink Floyd finally collapsed completely and called it quits after their last tour. But Pink Floyd still live on today in the form of their best albums, which, for new listeners, are: "The Piper at the Gates of Dawn" (Barrett years), "Meddle" ("Lost" band years), and all "golden age" and "Waters years" albums listed above.