Rush from Greatest Rock Bands of All Time 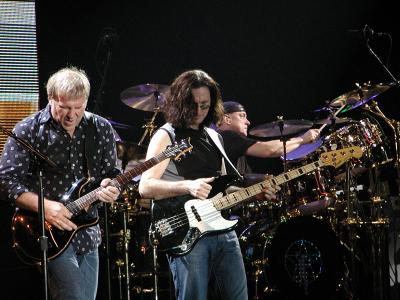 Some say. Rush is the best band ever in Canada. Emerging in 1968, these guys have taken progressive rock and heavy metal up to a new level. Crazy number of 20 studio albums gives the fans a ton of material to listen and love the Rush even more. The legacy of this guys is going strong.

Please forgive me, but I still can't really stand the singing voice. Which is a pity because it prevents me from fully enjoying a band that's otherwise very very good.

I bet many people who first hear Rush think there are at least 4 people in the band. That is how well they sound and obviously I'm not the first to say that here. They are just one of the most fun bands to listen to and sing along with.

Fantastic musicians. An exceptional body of work spanning nearly 40 years. Great live show - and boy, do these guys work hard for their live corn - 3hrs + and no slacking. Just an awesome band.

The kings of music as far as I'm concerned. They've been my runaway favorite band since 2004, and I don't see that changing. Their proficiency at their instruments is great, sure, but they are wonderful songwriters as well. Peart is a great lyricist even though he'll pen a few duds here and there. The band isn't the most consistent in the world - some of their albums have throwaways - but they experimented, changed their sounds, and -progressed-. Some say their music is cold, but I would argue that quite a few of their songs convey real emotion. "The Pass", "Emotion Detector", "Available Light", "Ghost of a Chance", "Red Sector A", "Afterimage"....I could go on and on.

Rush is OK. They can really play, perhaps the top of their respective instruments. They put on a great live show, and their music is complex instrumentally. However, they don't have a gift for melody, they struggle with lyrics, and they don't convey texture, tone or emotion. More than anything, sometimes they lose the big picture - songcraft and purpose. Just how I take them...

I really miss 'Counterparts' on this one...The album that brought them back to their thicker, heavier sound...

When I decide whether or not a band is truly great I look to see if they've added something to my life that I would miss. In this case...no. And if I hear how effin' incredible Neil Peart is one more time I might go all Columbine on 'em. THE KINGS of overratednesessess.

Rush is one of the bands that actually shaped my life and helped enrich my soul with music, knowledge and so many other things I could think of. The 1974 to 1982 period is the classic period of Rush.

One of the most underrated bands of the seventies. Sure, some of their stuff was cheesy (Hemispheres, anyone?), but things like 2112 have never been duplicated in music.