System of a Down from Greatest Rock Bands of All Time 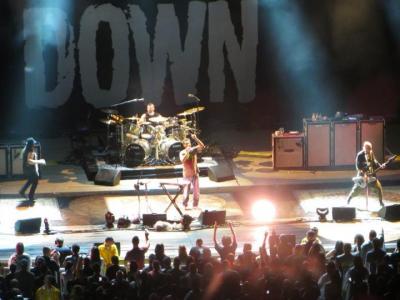 Thrown in a sea of below average bands in the nu-metal scene in the nineties System prevails to stand out but how much of that is actually worthwhile? Every time I go back to them remembering I was a huge fan a few years back I get an overwhelming feeling of average from the band. They have their strengths but I believe they falter a lot much like their peers (Static X, Mushroomhead, Deftones).

You have to have some respect for a band that managed to rise out of that cesspool of Limp Bizkit, Stain'd and Korn shit from the late 90s and still maintained more than a shred of dignity.

I'd agree with the earlier comments - they seem to rise above the myriad of mediocrity associated with late-90s nu-metal. They are leagues ahead of Limp Biskit, Staind, and Korn, but does that mean they are quality? Sometimes I appreciate their aggressive sound and punching lyrics, and sometimes they sound a little adolescent.

Amazing band with a great message. I'm hoping they release something this year.

Heavy metal done right. These guys have developed an original and iconic style, upholding both heaviness and melody without compromising on the other. For me, their first three albums are the best, with Toxicity being up the among the greatest rock albums ever released.

A stand out in their time,of course,but now? Pretty average if you ask me. They have their stand outs and perhaps one great album,but the rest is kind of mediocre and boring. Definitely not bad,but still very overrated.

Their first two albums were amazing but even after that they never put out a bad album. It seems that people often call them Nu Metal and I think that's because they were metal in that era. I would not put them in that genre. To me they're just a great band that take plenty of influences into their music that many in any genre don't recognize. They deserve to be mentioned among the greats plain and simple.