The Who from Greatest Rock Bands of All Time 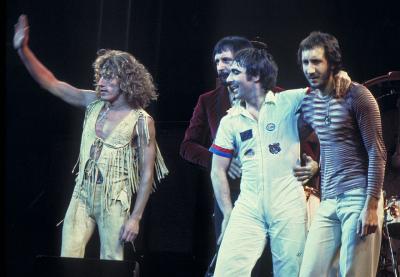 The Who are an English rock band that formed in 1964. Their classic line-up consisted of lead singer Roger Daltrey, guitarist and singer Pete Townshend, bass guitarist John Entwistle, and drummer Keith Moon. They are considered one of the most influential rock bands of the 20th century, selling over 100 million records worldwide and holding a reputation for their live shows and studio work.

Live at Leeds is the best live album I've ever heard. It's what really pushes The Who well into my top 5 favorite bands.

The best live album ever, one of the best rock albums ever and two rock operas. What's not to like.

Killer singles, fantastic albums and incredible concerts, The Who is the greatest rock band of them all.

Them and the Kinks are a couple of the best punk pioneers and only a handful can pound the skins like Moon, Bonham, Grohl and Krupa.

Like them, don't love them like I love Led Zep or The Stones. Don't know why. None of their albums, apart from Who's Next ever really grabbed me like LZ I - IV or Sticky Fingers or Exile did, 1st to last track. Still produced some truly great songs tho'

The Who are bedrock. Loud, proud, and creative. Capable of simple melodies and soaring rock operas. Some of the best players in the game. On par with Zeppelin.

Bravo daftpunter !!!!!!!!! Rolling Stone should put your quote on their next cover. So I will just let The Who speak The place is really jumping to the Hiwatt amps, 'Til a 20-inch cymbal fell and cut the lamps, In the blackout they dance right into the aisle, And as the doors fly open even the promoter smiles, Someone takes his pants off and the rafters knock, Rock is dead, they say, Long live rock, long live rock, long live rock.

When we were growing up in S.Jersey in the 70's everyone had a band. Luckily we had a LOT of great bands...The Beatles (done in 70 but AOR played the CRAP out of 'em), The Stones, Led Zeppelin, The Kinks, Jethro Tull, Yes...You know, classic rock THEN it was just R-O-C-K (Did I even list an American artist?). But it wasn't classic rock, they were active. livinig breathing bands, not dinosaurs. They were into drinking, drugs, loose women, destroying hotel rooms and generally acting badly. And the biggest, baddest, coolest of them all were the Who. Three manic virtuosos playing lead instruments that somehow formed into songs by force because if they didn't work Roger Daltry would have beaten up Pete Townshend while John Entwistle commented on the action, and Keith Moon proceeded to smash the sh*t out of every breakable piece of furnishing in the room because he was drunk as a loon. Actually Pete played rhythm, John played lead, Roger yelled man-size lyrics (you really couldn't call it singing) and Kieth played whatever the hell it was he played on his massive kit. They made the greatest album that never was: Lifehouse, the greatest song ever (Pure and Easy) and the greatest album ever: Quadrophenia. And why doesn't YOUR band do something cool like piss on a rock, get their picture taken zippering they're fly and have everyone simply overlook how friggin' cool they were doing it because the music inside just simply made you forget the cover? Because YOUR band wasn't (isn't) as cool as the Who, that's why

The Who were at the top of the '60s British Invasion but really had only Pete Townshend as prolific writer whereas the others were writing duos (Lennon/McCartner; Jagger/Richards, Page/Plant).

One of the 5 best bands of all time. It's just plain wrong that the Who is ranked behind the Clash.