Van Halen from Greatest Rock Bands of All Time 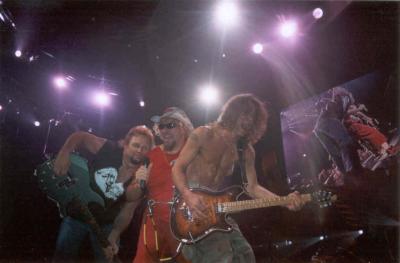 Van Halen is an American hard rock band formed in Pasadena, California, in 1972. From 1974 until 1985, the band consisted of guitarist Eddie Van Halen, vocalist David Lee Roth, drummer Alex Van Halen, and bassist Michael Anthony. The band went on to become major stars, and by the early 1980s they were one of the most successful rock acts of the time.

The Roth years were much more consistently strong. Hagar's albums have some great tracks, but almost always include several tracks of filler. Roth's are usually pretty consistent. Amazing musicianship, great bombast. A little sophomoric with the lyrics. A good time, but nothing to make you think. If you expect a good time, you'll get it.

I am a huge fan of the original lineup. I believe their debut is one of the best albums of all time. Van Halen II, And Women and Children First have some great songs but I prefer the Fair Warning and Diver Down. With 1984 they blew up and broke up. They were very much of their time.

Van Halen is one of the most influential rock bands of their time. Of course that means without Van Halen there probably wouldn't have been that god awful hair metal scene throughout the 80's. However, I forgive them for that because I enjoy their work with Roth and a number of tracks from the Hagar era. Very talented band with a couple classic albums.

I'm new to Van Halen. I bought the albums from ITunes after my boyfriend played Different Kind of Truth. Loved it! Stay Frosty has been my most played song this year. So much fun! It's true, Happymeal. Van Halen sounds so different with the 2nd singer. It's not like AC/DC. It's like if the Beatles fired John Lennon and hired Rod Stewart. Even if the Beatles kept the name like Van Halen did and still had hits, they wouldn't have been the Beatles. Eddie and David Lee Roth have one of those special chemistries, like Mick and Keith or Plant and Page. I think it confuses people about Van Halen how they were two totally different bands. I think that's why a poster wrote they're misunderstood.

They essentially changed their genre when Sammy Hagar joined. They went from lead guitar driven hard rock to synth-y pop. While I understand (and kind of agree) with your point about including a band's bad albums with the good, these count as two different bands.

Van Halen is one of the most influential rock bands over. A lot of that credit is due to Eddie with his guitar tapping. He wasn't the first to do it, but he took it to an extreme that had never before been seen. The solos are out of this world... but those guitar chops are insane as well. Best album is definitely their debut.

Welcome to the most misunderstood band in rock and roll history. Van Halen's debut in 1978 ("Van Halen") is a rock n' roll "game-changer," in the same way as Jimi Hendrix's "Are You Experienced?" or "Led Zeppelin," or "The Ramones." It's difficult to describe via antecedents: the attitude of The Ramones, the musicianship of Led Zeppelin, filtered through blaxploitation films, Southern California skateboarding culture, and drugs. The band's (now) seven studio albums with David Lee Roth will likely appeal to the inner-10 year old in everyone, (if that inner-10 year-old still exists, that is,) and its propensity to experiment with diverse musical styles will appeal to all but the most jaded, (a la The Beatles.) By "1984" (not just a year and George Orwell apocalyptic scenario, but a Van Halen album too) - the garage band aspects that defined Van Halen's first five albums have been smoothed, but not eliminated - and the band's experimentation continues, resulting in a blockbuster album that defined an era, (in America, an entire generation.) Van Halen - when David Lee Roth is in the band - mixes characteristics from diverse musical genres, ultimately creating something unique. This is evident on its 1970s releases ("Van Halen," and ""Van Halen II,") and even more so in the '80s, but impossible to ignore by Van Halen's "I can't believe it's this good" 2012 comeback album, "A Different Kind of Truth." Van Halen released five albums without David Lee Roth as singer, all of which sound quite different than those released with him. The best of these is "5150," (1986,) on which Eddie Van Halen continues his experiment with new wave. 1991's "For Unlawful Carnal Knowledge" (1991) can be inconsistent, but the highlights are enjoyable.