Palmyra from Lost Cities of The World 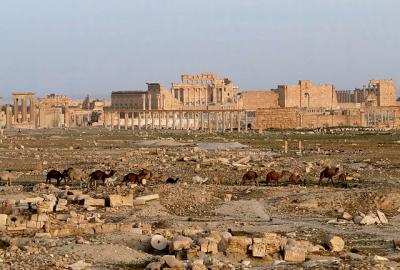 Settled within the Syrian desert, north-east of Damascus, this lost city was initially called Tadmor. The archives of Mari, dating from the 2nd millenium BC, were the first to testify the existence of the city. After the Romans conquered Syria in 64 BC it remained semi – independent until the mid first century AD, and it was a Roman Province of Syria until the third century AD. Its significance lies in the fact that it presented the center of trading crossroads connecting the Roman Empire with Far East, India and China. Inhabitants of The Desert Rose, as it's also called, were mostly Armenians and Arabs. In 636 Muslim Arabs took over the city. People started abandoning it after 800 AD. Today, its ruins, which represent an example of Roman-Greek art mixed with Persian influence, lie next to the new settlement. Some of the most important buildings are: the Temple of Ba’al, Theatre, Roman aqueduct, the Agora and Diocletian's Camp.