Nomi Sunrider: The Strongest Woman Jedi of All Time from Most Powerful Jedi 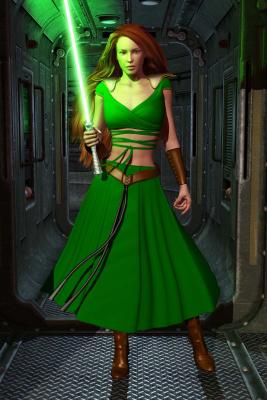 In the prequels, we learn that Jedi are forbidden to marry and that Anakin was initially considered too old for training, but those rules weren’t always enforced. That’s a good thing too as they would have denied the Jedi one of it’s greatest champions in the form Nomi Sunrider. After her husband’s death, Nomi, whose husband had been a Jedi, decided to join the Order. During the Great Sith War, she helped defend Coruscant from Exar Kun’s Mandalorian allies. The young Jedi also displayed a talent for the technique of Battle Meditation, which allied her to amplify the prowess of her allies while sapping her opponents of their morale and coordination. When the time came to finally confront Kun, it was Nomi who led the Jed in creating the Wall of Light which bound Kun’s spirit to the temple on Yavin Four. However, Nomi’s greatest power was her ability to sever a person’s connection to the Force. It’s something she only used once in retaliation to Ulic Qel Droma’s murder of his brother. Nomi’s attack left the sith lord forever cut off from the Force.