Darth Nihilus from Most Powerful Sith Lords of All Time 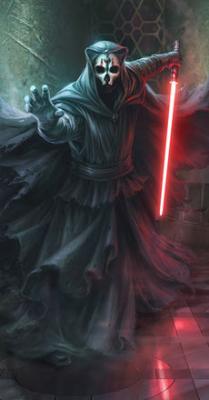 Darth Nihilus (pronounced /ˈnaɪ.ə.lɨs/) was a Human male who reigned as a Dark Lord of the Sith during the era of strife following the Jedi Civil War. Before becoming a Sith Lord, he lost everything during the Galactic Republic's war against the Mandalorian Neo-Crusaders. He survived the activation of the Mass Shadow Generator superweapon during the war's final battle at the planet of Malachor V, which surrounded the planet with a destructive spatial phenomenon known as a mass shadow. Experiencing the shadow that obliterated almost everything on and around the planet made Nihilus crave Force energy. The affliction painfully ravaged his body while rendering him a wound in the Force. He was found by a seeker of these, the Sith Lord Darth Traya, who told him that she could teach him to feed his endless hunger. He accepted her offer of apprenticeship at the Trayus Academy on Malachor V, where he, over time, became one of three concurrent Dark Lords of the Sith.