Galen Marek from Most Powerful Sith Lords of All Time 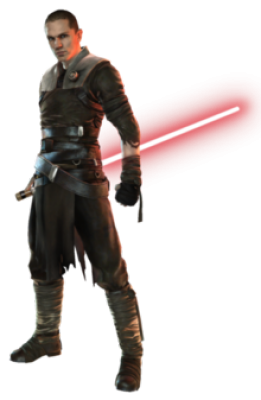 Starkiller, born Galen Marek and also known as The Apprentice, is the Dark Jedi anti-hero protagonist of the Star Wars: The Force Unleashed project. In 2014, Lucasfilm rebranded him as part of the Star Wars Legends non-canonical story-line, and the character has not been re-introduced yet into the Star Wars canon. He is raised by Darth Vader and is made his secret apprentice under the name "Starkiller" due to being potent with using the Force for destructive purposes and described as less of an assassin and more of a "Force wrecking ball". The character's name is taken from Luke Skywalker's original name, "Annikin Starkiller".