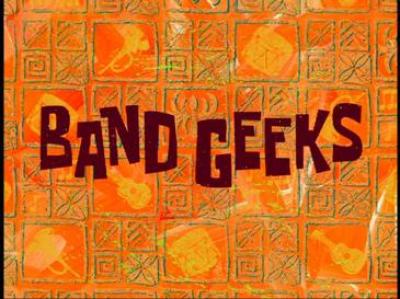 "Band Geeks" is the second part of the 15th episode of the second season, and the 26th episode overall, of the American animated television series SpongeBob SquarePants. It originally aired on Nickelodeon in the United States on September 7, 2001. It was written by C. H. Greenblatt, Aaron Springer, and Merriwether Williams, and the animation was directed by Frank Weiss. Springer served as storyboard director, and Greenblatt served as storyboard artist. The song "Sweet Victory" by David Glen Eisley was featured in the episode and was later released on the album SpongeBob SquarePants: The Yellow Album in 2005. The series follows the adventures and endeavors of the title character and his various friends in the underwater city of Bikini Bottom. In this episode, Squidward tells a lie, claiming that he has a marching band, after his high school rival Squilliam Fancyson brags about being a successful bandleader. Squilliam offers to let Squidward and his band cover for him at the Bubble Bowl. Squidward accepts eagerly, but realizes he does not have a band. He recruits various citizens of Bikini Bottom to play in his band, but they perform terribly in rehearsal, which makes Squidward quit. SpongeBob, disgraced, gets the band together and they give the performance of their lives. At the Bubble Bowl, Squidward is successful in front of his rival. The episode received critical acclaim, with several critics considering it one of the best episodes of the entire series. "Band Geeks" received a nomination and won at the 2002 Golden Reel Awards for Best Sound Editing in Television – Animation.