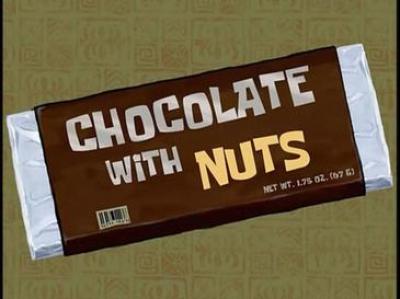 "Chocolate with Nuts" is the 12th episode in the third season, and the 52nd overall episode of American animated television series SpongeBob SquarePants. It is written by the storyboard directors, Paul Tibbitt & Kaz alongside Kent Osborne and Merriwether Williams, with Andrew Overtoom serving as animation director. It was produced in 2001 and aired on Nickelodeon in the United States on June 1, 2002. In this episode, SpongeBob and Patrick become entrepreneurs in an attempt to live the fancy life.

In the episode, SpongeBob accidentally receives Squidward's Fancy Living Digest magazine in the mail, inspiring him and Patrick to become entrepreneurs. At the suggestion of Patrick, the pair become chocolate bar salesmen, which results in them purchasing large quantities of chocolate bars from the Barg 'n' Mart. The first customer in their door-to-door travels, however, just screams "CHOCOLATE!" and chases the two away. Afterward, SpongeBob and Patrick attempt to sell chocolate to another person, only to be conned into buying chocolate-carrying bags from that person, twice in a row. They then try to sell it to a woman who then wants to buy one, but when SpongeBob can't find a chocolate bar because of all of the carrying bags, the customer gives up. They are then chased away again by the chocolate fanatic. After their disastrous results in their previous attempts, the two take a break at the diner, and decide to "try being nice." However, this is unsuccessful, ending in Patrick buying pictures of a customer in his childhood, as is their attempt to "focus" (resulting in Patrick staring at a customer until said customer slams the door on Patrick's eyes.) Then, they decide that the only way to sell chocolate is to "stretch the truth," which is successful when they convince an old woman (to the dismay of her daughter) that it "makes you live forever." The lying continues, but after they attempt to help a seriously injured man (who turns out to be the same man who sold SpongeBob and Patrick the carrying bags in disguise) by buying his chocolate, their profit is lost. However, the chocolate fanatic catches up to them, and, in a turn of events, buys all of the chocolate that SpongeBob and Patrick have. They then use the money to rent out a fancy restaurant, allowing access only to themselves and their dates, the old lady and her daughter who they sold chocolate to earlier.