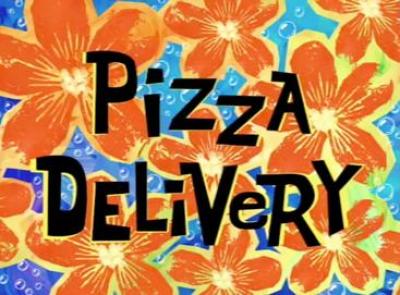 "Pizza Delivery" is the first segment of the fifth episode of the American animated television series SpongeBob SquarePants. The episode was written by Sherm Cohen, Aaron Springer, and Peter Burns, and the animation was directed by Sean Dempsey. Cohen also functioned as storyboard director, and Springer worked as storyboard artist. It originally aired on Nickelodeon in the United States on August 14, 1999. In the episode, the Krusty Krab receives a call from a customer ordering a pizza, and Mr. Krabs sends SpongeBob and Squidward to deliver it. When the two employees become stranded in the middle of a desert, they get into numerous predicaments. Along the way, SpongeBob tries to show Squidward the way of the pioneers. In pitching the show to Nickelodeon, creator Stephen Hillenburg originally wanted the idea of having the characters on a road trip, inspired by the 1989 film Powwow Highway. However, he eventually gave up the idea, and resurrected it in "Pizza Delivery". The episode received critical acclaim, with most media critics considering it one of the show's best episodes.