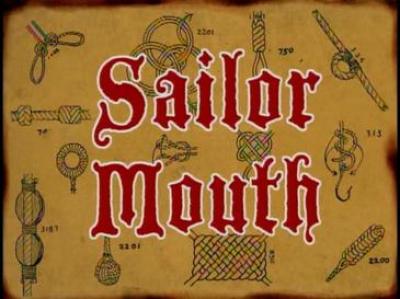 "Sailor Mouth" is the first segment of the 18th episode of the second season, and the 38th overall episode of the American animated television series SpongeBob SquarePants. The episode was directed by Andrew Overtoom, and was written by Walt Dohrn, Paul Tibbitt, and Merriwether Williams. Dohrn and Tibbitt also served as storyboard directors, and Carson Kugler, William Reiss, and Erik Wiese worked as storyboard artists. It originally aired on Nickelodeon in the United States on September 21, 2001. The series follows the adventures and endeavors of the title character and his various friends in the underwater city of Bikini Bottom. In this episode, SpongeBob reads a "bad word" off a dumpster behind the Krusty Krab, but does not know what it means. Patrick explains to him that it is a "sentence enhancer" which is used "when you want to talk fancy." The two start using it in every sentence they speak. However, when Mr. Krabs hears them, he warns the two never to use the word again or any of the 13 bad words. Later on, SpongeBob accidentally swears again. Patrick then runs to tell Mr. Krabs with SpongeBob trying to stop him. However, when Mr. Krabs accidentally injures his toe, he utters all the 13 bad words. The two cannot believe it and run to Mama Krabs to tell on him. Mama Krabs, who is appalled by their use of the words, makes the three paint her house as punishment. The episode received positive reviews, while various members of the SpongeBob SquarePants crew consider the episode to be one of their favorites, mainly due to the satirical nature of the episode. However, the episode was not immune to negative reception, and was criticized by watchdog media group the Parents Television Council and fans, who interpreted the episode as an example of promoting and implicitly satirizing use of profanity towards children.