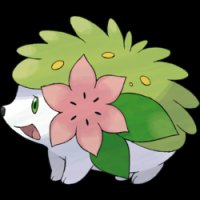 Shaymin (Japanese: シェイミ Shaymin) is a Grass-type Mythical Pokémon introduced in Generation IV. While it is not known to evolve into or from another Pokémon, it has a second Forme activated by using a Gracidea flower in the daytime. Its original Forme, Land Forme, will then become the Grass/Flying-type Sky Forme. Shaymin's Sky Forme will revert into its Land Forme during the night, while frozen solid, or if it is deposited in the PC. Shaymin was officially revealed in February 2008, when it was listed as a star of Giratina and the Sky Warrior. In early June of the same year, its Sky Forme was revealed.