The Polearms of Capture from Top 10 Samurai Weapons 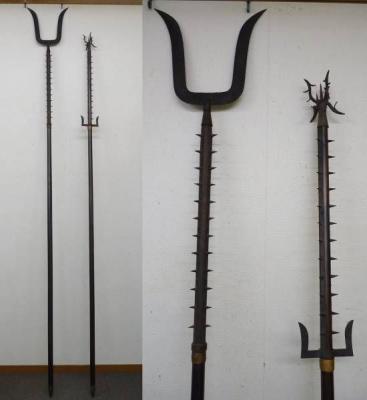 Although some sources place the origin of the sasumata in the Muromachi period, most sources discuss its use in the Edo period. In Edo period Japan the samurai were in charge of police operations. Various levels of samurai police with help from non-samurai commoners used many types of non-lethal weapons to capture suspected criminals for trial. The sasumata (spear fork) together with the tsukubō (push pole) and the sodegarami (sleeve entangler) comprised the torimono sandōgu (three tools/implements of arresting) used by samurai police and security forces. Samurai police in the Edo period used the sasumata along with the sodegarami and tsukubō to restrain and arrest suspected criminals uninjured. The head of the sasumata would be used to catch around the neck, arms, legs, or joints of a suspect and detain him until officers could close in and apprehend him (using hojōjutsu). The sasumata had a long hardwood pole usually around two meters in length with sharp barbs or spines attached to metal strips on one end of the pole to keep the person being captured from grabbing the pole. The opposite end of the sasumata pole would often have a metal cap, or ishizuki like those found on naginata and other pole weapons