An assault rifle is a selective-fire rifle that uses an intermediate cartridge and a detachable magazine. Assault rifles were first used during World War II. Though Western nations were slow to accept the assault rifle concept, by the end of the 20th century they had become the standard weapon in most of the world's armies, replacing full-powered rifles and sub-machine guns in most roles 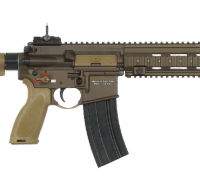 The HK416 A5 is a further development of the HK416 assault rifle in 5.56 x 45 mm NATO calibre. The most striking changes compared to its previous versions as well as to market available AR platforms include an improved and tool-less gas regulator for suppressor use, a redesigned, user-friendly lower receiver, which allows complete ambidextrous operation of the weapon and ensures optimised magazine compatibility, as well as numerous technical improvements to maximize the operator safety, reliability, ammunition compatibility and durability under real operating conditions. 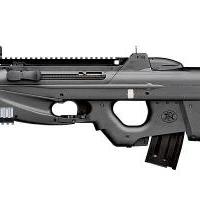 The FN F2000® is a compact and reliable assault rifle that can be fitted with a wide range of integrated modules or accessories to meet present and future requirements for various types of missions. Its modular design enables the customer to upgrade the rifle with evolving technologies such as electronics, aiming systems and accessories. The FN F2000® Tactical TR features a long upper Picatinny type rail and a triple rail handguard for add-on accessories. 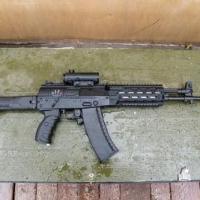 The Kalashnikov AK-12 is a Russian 5.45×39mm assault rifle, designed and manufactured by Izhmash (now known as Kalashnikov Concern) 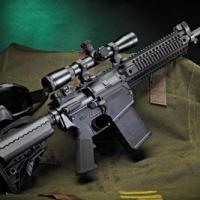 The New Colt LE901-16S “Modular Carbine” There is almost zero parts interchangeability between the various .30 caliber AR rifles, except for those parts they have in common with the AR15, such as lower-receiver fire control parts, sights and buttstocks. Even magazines are unlikely to interchange between brands.

The ARX100 was engineered with one purpose in mind: to be today’s best tactical semiauto rifle. It takes the concept of a modular rifle to futuristic levels, while maintaining an absolutely simple operation that make it ultra-reliable. With ambidextrous controls, easily-replaceable barrel and virtually endless possibilities for customization and accessorization, the ARX100 is adaptable to any firing scenario and is perfect for today’s most demanding tactical shooter.

The Barrett REC7 (designation stands for "reliability-enhanced carbine") is an American sporting rifle, it is an enhanced M4-pattern rifle available in either 5.56×45mm NATO or 6.8mm Remington SPC developed and manufactured by Barrett Firearms Manufacturing. 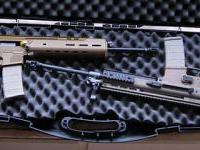 The Adaptive Combat Rifle (ACR) is an assault rifle designed by Magpul Industries of Austin, Texas, originally called the Masada. In late January 2008, Bushmaster entered into a licensing agreement with Magpul whereby Bushmaster would take over production, future development, and sales of the Masada 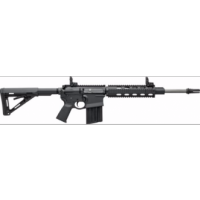 Like its 5.56 mm counterpart, the MR762A1 is a direct descendent of the HK416/417 series, and uses the HK-proprietary gas operated piston system in place of the common gas tube normally employed in certain firearms. Pioneered by Heckler & Koch in the G36, HK416, and HK417; this method virtually eliminates malfunctions common to direct impingement gas systems since hot carbon fouling and waste gases do not enter the receiver area. The MR762A1 stays cleaner, reducing heat transfer to the bolt and bolt carrier, and drastically reducing wear and tear on other critical components. The service life of all parts is increased substantially. The MR762A1 uses a barrel produced by Heckler & Koch’s famous cold hammer forging process. This manufacturing process uses the highest quality steel, producing a barrel that ensures superior accuracy, even after firing thousands of rounds. The MR762A1 is produced at Heckler & Koch’s American manufacturing facilities from both American and German-made components. The MR762A1 uses many of the assemblies and accessories originally developed for the HK416/417 series including adjustable buttstocks, ergonomic pistol grips, mechanical sights, and the HK free-floating four-quadrant rail system/handguard. This MIL-STD-1913 ‘Picatinny’ type rail system allows all current accessories, sights, lights, and aimers used on M4/M16-type weapons to be fitted to the MR series. The HK rail system can be removed without special tools by the user and ensures 100% return to zero when reinstalled. Ambidextrous operating controls are standard on the MR762A1, including a convertible charging handle and an ambidextrous selector lever. The MR762A1 uses the same 10- and 20-round translucent polymer box magazines made for the HK417; a 5-round magazine is also under development. MR762A1 rifles are well-suited for a variety of applications including law enforcement tactical, police patrol, general sporting, and hunting.