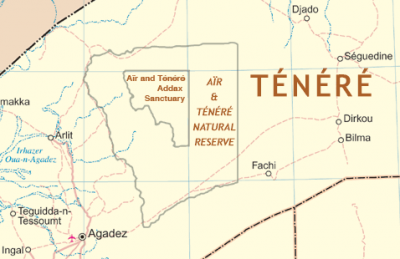 Aïr and Ténéré is located on the territory of the state Niger and it is protected by UNESCO.Its name is the combination of names of two areas which it covers: the east half of the mountain Aïr,and the west part of the desert Ténéré ( it belongs to the Sahara desert).The reserve is divided into two parts ,the first is the refuge for endangered species where living conditions are strictly controlled and where visitors aren’t allowed, and the second one is the natural reserve where visitors are allowed.One of the specificities of this place are various kinds of dunes ,caves,canyons,hidden water caves,plateaus and other geographical elements which can only be seen in this part of the world.Blue marble mountains and living dunes ,which constantly change the looks of this space,are also placed here.