Fall Out Boy from Best Bands of All Time 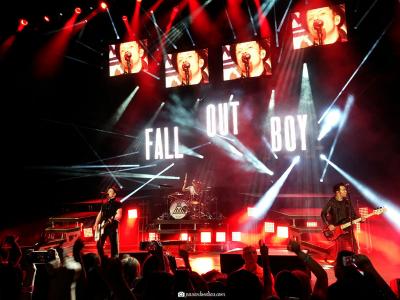 Considered to be one of the best bands in the pop punk genre, Fall Out Boy produces high-quality content and cements its place in the history of music. They focus heavily on the lyrics and deliver a deep message. Famous artists do the covers of their songs to acknowledge the band’s legacy.

Great band, sadly I think Folie will be their last great album. They've gotten much worse since the hiatus. And to be honest I can't see them improving.

My number one guilty pleasure band for sure. Under the Cork Tree is actually pretty good pop punk album in my opinion.

They make some pretty decent stand alone songs, great 'radio music' but their albums are very lacking and not the greatest by any means.

I feel the need to stand up for Fall Out Boy because on a site like this they don't stand a chance. For me they remain one of my favorite bands. Let me explain. At first glance they are your average radio friendly pop band, but I argue that they are at least a notch above that if not more. Fall Out Boy stands above their peers due to: 1. Pete Wentz's Lyrics and 2. Patrick Stump's Vocals. Pete Wentz is a master of word play and tongue in cheek lyrics. A favorite of mine being "Don't feel bad for the suicidal cats, they gotta kill themselves 9 times before they get it right." But his lyrics aren't all fun. I kid you not their song "You're Crashing, But You're No Wave" gives me chills in it's tragic tale of an innocent man found guilty and is sentenced to hang for his supposed crimes. I mean what other radio pop band has a chorus as strong as "A loaded God complex, cock it and pull it?" Off the top of their heads, the average teenage kid doesn't know what in the hell that even means. Then there's Patrick Stump on vocals. This guy is good. I would argue he has a range that rivals Michael Jackson, the King of Pop himself. The performances that best come to mind are on my personal favorite Fall Out Boy song, the wonderfully crafted, "What A Catch, Donnie" and on Patrick Stump's solo album "Solo Punk." I normally don't type this much on this site and I doubt I'm going to change any opinions here, but hey taste is subjective right? That said I will happily continue to rank Fall Out Boy's Folie A Deux up on my chart around Radiohead's Kid A and Nine Inch Nail's The Fragile.

People hate FOB because they sound like a bunch of teenagers. What did you expect from a pop-punk band? Comparing this guys with Radiohead, the Beatles, Led Zeppelin, King Crimson, Bowie, Metallica or whatever good band or artist you can think of is just pointless. They are here to create some catchy tunes, and if I had to choose between listening to them or some ass-faced pop "musician" (and I'd forgotten my headphones at home) I wouldn`t think about it twice. This isn't durable art, it's commercial stuff. However, I'll recognize that their releases are absolute shit since 2007...

Not to be harsh on other rock bands but I think Fall out boy should at least be ranked near to around the top 300 and not under the top 500 because of their popularity.

Probably the one band I can wave my snobbish musical standards for. Yeah, there generic and overproduced but I will always look at them like I did when I was 12/13 and that is, guys who make pretty catchy songs.

Sentimental favorites for sure. They're a real solid pop/punk group nonetheless. They definitely have a novel approach to what they do, which I can't say for a lot of other groups. Also, not sure if I'm that excited about them coming back, but their albums; Take This to Your Grave, From Under the Cork Tree, and Infinity on High; are all pretty solid.