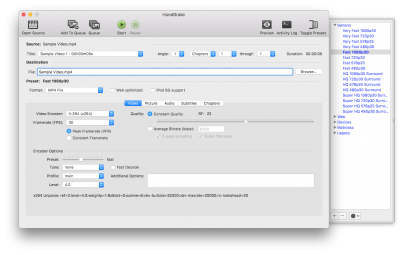 Just a little point to make: The Mac version of Handbrake doesn't require you to use another program to break through the DRM. I don't know why this is the case. I've had it explained to me once but I can't remember the exact reason. Either way, yeah, if you own a Mac then Handbrake is all you need!

You're right - as long as your Mac has VLC then Handbrake can rip DVDs just fine. Handbrake just borrows some VLC libraries as needed. Both VLC and Handbrake need to be the same type (32 or 64 bit). I don't know if there is something like this for Windows or Linux, but I know that this is how it works on Mac.

Handbreak isn't a ripper, it's a transcoder. Really old versions did decrypt as well, but decrypting was officially dropped in version 0.9.3, back in 2008. After that they decided to focus on transcoding only, letting other tools that are better at decrypting deal with it (such as.. anything else in this poll). I'm not really sure how to vote for this one. Ideally, I'd *like* MakeMKV to be the best, since I want a 1:1 MKV of the main title 99% of the time and it handles *most* protection well, but DVDFab is definitely the best as ripping commercial discs, hands down. Anything that MakeMKV can't handle on it's own has to go through DVDFab first, and then through MakeMKV. I don't have to do this often, but I definitely have to do it time to time.

yeah I know nerdfest just said this but it's the same on linux. I never realized you ever had to have anything other than handbrake, but of course I had VLC already installed anyway.

A-ha! That was the explanation I was trying to remember! That's right, it borrowed from the VLC libraries. I already had VLC installed so I personally never had to do anything though. Thanks for jogging my memory!

Jimmy Obomsawin just reminded me that the reason it works is because of some VLC libraries. But just like you, I already had VLC installed so never had to actually take any action.

It is a beautiful program. Sometimes I actually wonder to myself what the hell I'd do without it. Quicktime? HA.