Green Day from Greatest Rock Bands of All Time 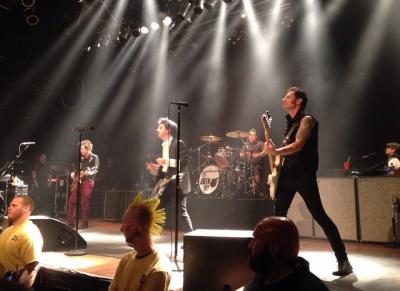 These Oakland kings of punk rock are still kicking it. One of the top modern rock bands, a regular and a wanted visitor of Billboard music charts, Green Day stands out a big time when talking about punk. More than 30 years on stage, these golden oldies know what is good music and we love them for it.

Green Day are on the stage since 1986, when 14-year-old Billie Joe Armstrong assembled his friends into an underground band. Green Day was performing in the clubs and gaining popularity step by step. While the period from the birth of the band and up to 1994 was a moderate success with Billy and company were working their way up the rock ladder, the next two years are a pure breakthrough.

Green Day are signed by Reprise and release Dookie, a total hit, which has skyrocketed band’s success, sales, and overall popularity. Guys were on top of commercial summary as their rock machine was going at full speed. After a lengthy period of mediocre success, guys release American Idiot and enjoy a new income of fame, money, and listeners. An album that targeted politics and specifically President Bush simply could not go unnoticed, especially when a good music was backing it up.

Twelve studio albums, Grammy awards, millions of fans, all of the was earned by hard work and sweat on the stage. Green Day still are the kings of punk rock, not listening to anyone and singing about what they please.

Tell us what you think about the music of Green Day and how much are you waiting for the thirteenth album to come out! Share your favorite songs, concerts, lyrics and opinions in the comment box below.

Loved them as a kid. New stuff is complete garbage tho

Another good rock band, in my opinion.

Green Day started out as a good post-punk band, along with The Offspring and blink-182, but eventually they evolved into a band that won't admit that they're not punk anymore but just write rock operas. They've made good music, but nothing comes close to Dookie.

Green Day are great for me! Dookie is a good album, but then for them ten years later to release American Idiot out of nowhere is a great thing. Nimrod is also good. I think they are mostly great for their singles though, International Superhits is quality from start to finish. Anyone who thinks Dookie sounds the same as American is obviously an idiot!

They have put out some of the best punk albums (Insomniac, Dookie, Kerplunk), but their quality has steadily decreased. Where American Idiot was a respectable rock opera, their newest 4 albums are questionable. That is unfortunate too, they used to be great.

It's just sad that they're so mainstream. It suppose to be an underground band! Shouting against the government and the media. I hate to see people controlled by the media listening to this. It somewhat made me hate them at the begging, but I gotta say they've kind of changed my life, a great band.

Band that I grew up in to, marked lives and deserves respect. If you don't care about it, don't waste your time.

I LOVED Green Day when I was younger. I honestly thought that Green Day was one of the best bands ever, and their songs meant so much to me. Nowadays, I don't care for Green Day anymore. Their new stuff isn't great(American Idiot is pretty overhated, though), but their old stuff is also average. Green Day is REALLY overrated, their music is average, boring and lacks creativity. Also, Green Day is ranked higher than Iggy Pop, the Kinks, John Lennon, & the Sex Pistols? What the hell? Dookie is a great album, though. It's one of my favorite albums of the 1990s. Dookie is a pop punk classic.

Gyo - you may not like the latter period of Green Day, but don't call it 'gay'.

Well Green Day were awesome when they first came out with Dookie. They were a cool punk band that you could listen to without getting yelled at by you're parents. But then they stopped being so punk and got a lot more full of themselves. I really respect them for still being around and for not letting this modern music industry swallow them up, but yeah there not very good (or as good) as they were before.