Linkin Park from Greatest Rock Bands of All Time 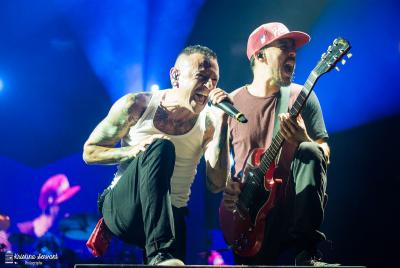 When I hear the word "mediocrity", I think of Linkin Park.

This band has it's highs and lows. When it has it's highs, such as Hybrid Theory, Meteora, or Minuets to Midnight, I find this band's high energy and loud music enjoyable. As for it's lows, such as A Thousand Suns, I find it hard to listen to some times, such as how they have so many instrumentals such as, The Requiem, Empty Spaces, Fallout, and many more. Living Things in my opinion is in the middle. This band is amazing live. If you ever get a chance to see them, go. Overall this is a good, not quite great band. And I don't understand why this band gets so much hate.

Hybrid Theory was awesome when I was 14, so nostalgic points for that, however, anything else by Linkin Park is simply awful.

Their first two albums were the peak of Rap-Rock, Nu Metal or what have you. They are ultimately the best at that scene but refuse to play it anymore and just cant find where they belong but maintain status with catchy pop rock songs but I think they have potential and always have just cant seem to make a full album of it. Loved these guys when I was younger but everyone grows up. Little Things Give You Away best song and more what they should chase after

Linkin park is basically not good enough to maintain the popularity they had in the early 2000s.

So overrated. How many songs about anger can a band have? There's some musical talent here, but they need to spend many sessions in the counsellor's office before they can write about something else besides pain, loss, anger and how the world sucks. Maybe lock them in a room with Elmo?