Muse from Greatest Rock Bands of All Time 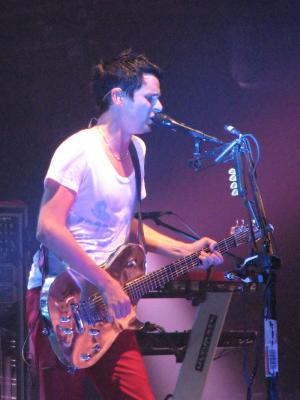 One of English best modern bands and worldwide heroes of alternative rock, Muse has already cemented their place in the rock history. Their debut album came out in 1999, despite the band’s foundation in 1994. It took them whole five years to get this thing sorted out properly, defining the sound of the group and stating that they are not in the industry to be forgotten soon. Next album followed up in 2 years, continuing the music ideas of its predecessor and solidifying the band’s positions as one that takes British music to the global popularity.

Third album broke the record, as the first one to stay at the top of UK albums five times in a row. 2006 was the year of Supermassive Black Hole and further extension of international popularity. Introducing electronic and pop elements, the album reinstated the legacy of Depeche Mode and increased the number of people who were looking for the good music and discovered Muse.

Band’s trophy shelf includes two Grammy awards and many British ones as the sign of global recognition and appreciation of their music. The sound itself combines progressive metal, art rock and electronic touches. It is not a rare thing to hear symphonic orchestras in their songs that just indicate how big of a scale these guys are aiming for. Since the global audience discovered Muse, there was no shortage in those who desired to see them in their country, therefore the band is touring all over the world and promise to visit North America in a short time. Are you waiting for Muse to come to your city? Tell us in the comments!

Alright yeah so maybe I over-exaggerated a little in my first comment. I will never deny that Origin of Symmetry, Absolution, and Knights of Cydonia are three of my favorite albums of all time, and they are all fantastic. Those were the creative albums I was talking about. Showbiz, their debut was also great. But since then, although I still love Muse, they've gone downhill. The Resistance was alright, but The 2nd Law was kinda chaotic now that I really think about it. And although I loved Drones like the first two months after it came out, I'm starting to see that it really isn't that good. Sure Reapers and The Handler are great, but the rest musically is kinda meh, and lyrically it's shit. But hey, maybe in 2018 we'll see the return of 1999-2006 Muse. These guys were the band that really introduced me to rock music, which is why I love them, but I get why people don't like them.

Matt Bellamy must be one of the most vocally overacted and affected singers of all time. I mean, I can enjoy some drama, but listening to this guy is like listening to Thom Yorke playing Jesus Christ Superstar right after telling him that his mother has died and while a football player kicks his balls.

Its incredible that the latest work has made them more successfull and is an indication of why they have become one of the biggest "sell out" bands of this generation. Enjoy the glory lads. In saying that I always felt they were commercially driven and a marketing wet dream.

Haven't really listened to Muse in a while, but uh yeah Love 95% of all their songs...some song's on Drones i'm like meh...-5% Because they sold out hardcore

Black Holes & Absolution were amazing. Throw in Origin of Symmetry and you have 3 really strong albums. None would be featured on my favorite of all time but I respect the greatness in those albums. After that has been a struggle but their top 3 is worthy of all acclaim.

A great band. However, they have steadily declined since the release of Black Holes. I believe they peaked with that album. Don't get me wrong, The Resistance and The 2nd Law are decent. It's just, there seemed to be a time when lyrically and musically they were ahead of the game but when The Resistance came out and I first listened to it, it felt behind and almost cliched at that point. I think they made up some ground with The 2nd law (I happen to think it's better than The Resistance) they still seem they're trying to catch the same lightening in the same bottle. My fear is they may have peaked, which is too bad because their first 3 or 4 albums were really great. Origin of Symmetry being my favorite and Black Holes being their culminating masterwork.

One the best of the last years. A sort of bizzarre rock with many strange influences. Good the first albums, but also the lasts, with the wish of changing every time and not to repeat themselves

I used to love this band, but then I got older and discovered better music. Muse was an essential gateway band from pop music to... not-pop music for me as a young teen, so for that I appreciate them. I just can't help but feel that they're a distinctly average band. Sure they've made some good songs over the years, but they're inconsistent and generally quite shallow lyrically and musically. I guess what I'm trying to say is that they produce entertainment - which they're undeniably great at - but they don't really create art, regardless of what their fanboys or pretentious experiments with classical music would suggest. Don't get me wrong, I don't dislike Muse. I just can't see them as anything above an average band.

Muse was my favorite band when I was younger, but I don't like them that much these days. Muse is very talented, but Matt Bellamy's voice is very annoying, his lyrics are cliched, overly simplistic crap that a middle school student would write, and their music is very repetitive. Similar to what other people have said, Muse is inconsistent, and their music feels so shallow, fake & artificial. Muse lacks emotion & substance, and they're so focused on being dramatic & over the top that they forget how to write genuinely good songs. Additionally, Muse has gotten worse over time; The Resistance was the beginning of the end for Muse, and The 2nd Law is basically a parody of everything that Muse has done over the years. Muse is also EXTREMELY overrated on this site. I cannot understand why their albums (particularly Absolution, Origin of Symmetry & Black Holes and Revelations) are ranked so highly on the "top albums of all time". Furthermore, Absolution, Origin of Symmetry & Black Holes and Revelations are actually ranked higher than albums by The Cure, The Clash, R.E.M., Talking Heads, Wire, Dead Kennedys, Elvis Costello, Gang of Four, The Replacements & Sonic Youth. WTF?! Seriously, Best Ever Albums, are you kidding me? I can't believe that this site implies that Muse is better than all of those artists that I mentioned. At the very least, though, Black Holes and Revelations is probably Muse's best overall album (I'm most likely in ythe minority for saying this, though), and it had some very good songs on it.