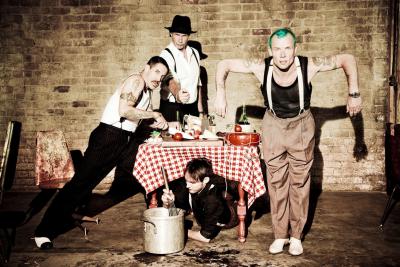 alright for real now. i respect the fusion of the genres of rock/alt rock and funk, and i think theres a time and place for brainlessly fun music. but im seriously starting to find the RHCP intolerable. just saying meaningless garbage on songs like around the world and give it away doesnt make for an interesting or worthwhile listen for me anyways.

I guess I don't get it. They're good, they have some great singles. I've listened to a ton of their albums and honestly feel that they didn't change their sound up too much. I guess that's fine for some people, but I'm interested in artists who evolve over time. I found a lot of it to be bland.

The only band that succesfully kept the funk genre alive during the 90's. I respect that.

Really surprised this band does not crack the top 20 in the Best Ever Artists list on this site (see right margin). Way better than Nirvana in terms of output and quality, objectively better than Arcade Fire (whom I like, but come on) and technically, player-for-player much better than or at least equal to just about any other four-piece band.

Frusciante is one of the best rhythm guitarists in rock history and they are one of the best bands ever when he is in the lineup. People complain that all their best albums are too long. Really? Over-brimming generosity is a bad thing?

This is definitely one of those bands that deserves the fantastic rep that they have. It has a more original sound than most and a clever mix of styles/genres. RHCP has a positive energy about them and their work that isn't overpowering. It's more of a feeling I cannot describe and that you'd have to listen for yourself for. They have a special place in my heart because growing up, and continuing to listen to them up even to this day, at my lakehouse on the radio, their hits would play on a station that unfortunately doesn't air anymore. Listening to them always calms me down (unless it's BSSM, in which case I get fired up lol.) Of course, RHCP is not the same without John, although that doesn't stop "Blood Sugar Sex Magik" and "Californication" from being two fucking amazing albums, and by far the best two albums to ever come from them.

This band is an good band. It's not as "great" as ppl are making it out to be. COMPLETELY overrated but don't label me as a hater. Californication is literally everything to me. It is the greatest album to me ever and that will never change. Pure bliss. But that era is gone. John is gone. His style was like no other. If RHCP continued in the Californication/ BTW style but evolved it a little more, I would rate it higher. The reason I am rating it as high as I am because of those two albums. BSSM is nowhere near Californication territory although it is an excellent album.

One of the best bands in music. And much more original than all but a handful. That they incorporate different styles or genres in their music is only a part of their originality. It's their attitude dude! And their professionalism and proficiency as musicians & overall artists. These guys are truly great performers in every way. That is rare. My favorite song? Soul To Squeeze & Under The Bridge are tied. Album? Duh!

RHCPs changed music with their incredible style and energy. I have savored the experience of listening to their music for the better part of my life. I remember hearing Blood Sugar Sex Magik when it came out it blew my mind. They have continually rewarded us with great music with integrity. I recommend all of their albums not a mediocre in the bunch.