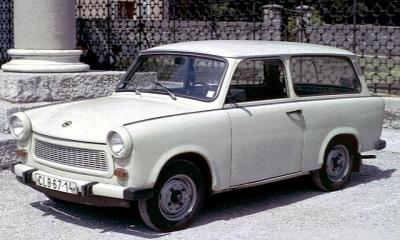 According to some estimations, every seventh vehicle on the roads of the post-II-World-War East Germany was this legendary car. The first one came out of the factory in Zwickau in Saxony in1957. Imagined as an equivalent of Volkswagen Beetle, this poor thing was produced from cotton waste mixed with phenolic resin and pressed by the vehicle body. Its most recognizable features are: a tractor-like engine sound and the stink of exhaust gas which is a result of mixture of gasoline and oil. The ugliness of this car is witnessed in the case of an engineer- Grim Godal who was sentenced to a fine of one thousand pounds after the neighbors had sued him for ‘visual pollution’ of the environment with his large collection of Trabants.