The Simpsons is an American animated sitcom created by Matt Groening and produced by the Fox Broadcasting Company. The main characters are a satire of a working-class family, consisting of Homer, Marge, Bart, Lisa and Maggie. The series lampoons many aspects of American culture, society, politics and history.
The cartoon made its debut as 60-second animated bumpers for the The Tracey Ullman Show, with the first short airing on April 19, 1987. The shorts were then expanded into a full-length 30-minute television spin-off by 20th Century Fox, first airing on December 17, 1989. As of 2016, 27 seasons of the series have been produced, with the 28th season that premiered on September 25, 2016.
The series currently holds the record for the longest-running prime-time sitcom in the US, running for 27 years and 28 seasons, as well as 3 seasons of shorts since 1989, and becoming the longest-running program on FOX.
Ranktopten has collected Worst Simpsons Characters
1 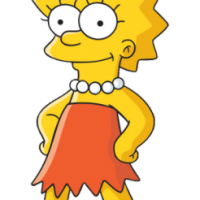 Lisa Marie Simpson (born May 9) is a charismatic 8-year-old girl, who exceeds the standard achievement level of children her age. Not to everyone's surprise, she is also the moral center of her family. In her upbringing, Lisa lacks parental involvement of Homer and Marge, which leads to hobbies such as playing saxophone and guitar, riding and caring for horses, and interest in advanced studies. In school, Lisa's popularity is affected by those who view her as a geeky overachiever, which leaves her with only a few friends. Lisa Simpson is a smart, witty, independent girl who focuses on her goals and strives to reach her potential, and at age 8 she is already a member of MENSA with an IQ of 159.

worst character ... just a stupid sjw and a very annoying one ...

The worst simpsons character ever ... unfunny ... annoying and BORIIIIIINNNNGGGGGGGG , just a stupid sjw

She is a representation of the stupidity, two faced, hypocritical SJW and "progressive" culture, showing all that is bad and stupid about that, honestly they actually wrote her well, because she begs for hathred towards herself lol

SHE IS THE WORST THING EVER 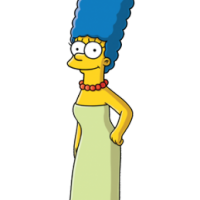 Marjorie Jacqueline "Marge" Simpson (née Bouvier) (born October 1, 1956), the deuteragonist of The Simpsons, is the homemaker and full-time mom of the Simpson family. She and her husband Homer have three children: Bart, Lisa, and Maggie. Marge is the moralistic force in her family and often provides a grounding voice in the midst of her family's antics by trying to maintain order in the Simpson household. Aside from her duties at home, Marge has flirted briefly with a number of careers ranging from police officer to anti-violence activist.

-she should change her name to naggery bossier -she paid a girl to be Lisa's friend, and is emotioanlly abusive and manipulative towards her kids and husband -goes all psycho when she doesn't get her way with her fam if nagging isn't enough

Awful mother. Her forms of discipline include cold shoulders, guilt tripping, and other mental games that set her children up for future therapy. Her problems and negative qualities are easily rolled over by herself, while others mistakes are held onto indefinitely. 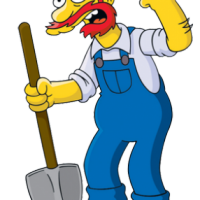 William "Willie" MacDougal, is a recurring character on The Simpsons, voiced by Dan Castellaneta. He is the head groundskeeper at Springfield Elementary School. Willie is almost feral in nature and is immensely proud of his native Scotland. He is easily identifiable by his flaming red hair and beard, as well as his aggressive temperament and thick though inaccurate Scottish accent. 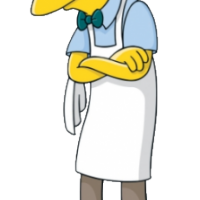 Moe was born on November 24. Moe either illegally immigrated to the United States from Holland or was born in Indiana. He used to have an Italian accent but no longer uses it, hinting at Italian heritage. At some point in his life, Moe ended up on Mt. Everest where he was brought up by his father, a yeti. When Mr. Burns bought the Springfield Nuclear Power Plant and came into Springfield riding an elephant, Moe asked to touch the elephant. The elephant then steps on Moe, giving him his bad looks. As a child, he played the part of "Smelly", a tough kid, on The Little Rascals until he killed Alfalfa (or rather, an orphan portraying as him) in a fit of rage for stealing his bit and was fired. His first kiss was at 10 with Comic Book Guy. At some unspecified time during his childhood, his parents dropped him off at summer camp, and never returned to pick him up, leaving the Summer camp: Camp See-a-Tree, as being the closest that he could call a home. Moe becomes a victim of prank calls when young Marge calls the boys' camp and young Moe answers it. Marge asks to talk to Elvis Jagger Abdul-Jabbar, which is what young Homer introduced himself as to her. Moe, thinking that she is trying to trick him, becomes angry and hangs up. Then he turns and says, "And, uh, that's the origin of that". Moe has stolen many things but a more remembered item is the bag of Aztec coins in which created the criminal snake (metaphorically speaking).