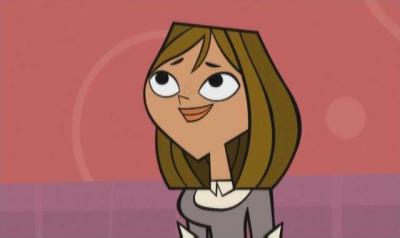 Courtney was a participant in four seasons of the show but have never managed to win one. Getting eliminated in episode 12 of the Island, she improves her results and the following three Courtney’s appearances earn her places from 4th to 7th. First appearing as an optimistic and cheerful person, she makes us change our views due to her severe reaction to any defeat or change of plans that do not suit her.

Do you have anyone to lead your football team? Want someone to be in charge of your acting class or just tell you what to do all the time? You better call Courtney! This attitude of pretending to be the leader for everybody she quickly annoys characters and in some occasions becomes a villain of the show.

Courtney sometimes reminds us of Heather, when she does not hesitate to use any means to get what she wants. This way of doing things is not much appreciated on Total Drama and sometimes it costs Courtney a place on the show. She even manages to win her place in Total Drama: Action by winning a lawsuit to the creators of the show. You can have no doubt that this girl will get what she wants. She also gets occupied in a short-term relationship with Duncan which does not go that well. Courtney eventually proves that she will put aside all friendly and romantic relations to get a big reward.

Despite being disliked by the majority of other contestants (no matter the season) she still manages to work her magic and get pretty far in each season after the Island using all her skills and physical endurance.

Would you vote for Courtney in one of our lists? Let us know why!

I took the total drama test and got Cortney then Ducan.