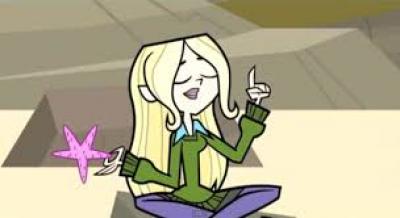 Dawn, The Moonchild, makes her debut in Total Drama: Revenge of the Island. Lasting only for 6 episodes, she still manages to confuse and amuse us at the same time. Animal lover to the bones, she could make a fine friend for Bridgette. Furthermore not does Dawn like the animals, but they absolutely adore her as she manages to establish some sort of a special connection between the representatives of the nature and communicates with them even despite their mutations.

She is mysterious and looks creepy to most of the contestants with her pale skin and preference to be alone for long periods of time. She practices meditation techniques and finds amusement in reading tea leaves. Quite creepy, we totally agree. Dawn also manages to stay dry after the boat she was on was blown up and there could be no way she could get there first, but she reached the shore before anybody else and had not a single drop of water on her. This sets off many contestants and they do not like her presence, especially when she foresees Dakota's fate and that her hair will turn green, along with other … improvements.

Dawn is still kind and helping, ready to offer her assistance at any given moment but often her good intentions are neglected by other contestant’s prejudice that appeared because of her unusual talents and skill.

What do you think? Does Dawn deserve to be more on the show? Did you like her look and powers that scared most of the show’s cast.