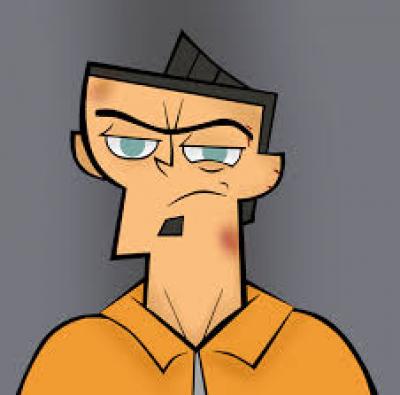 We can recognize that green mohawk from millions of others. Considered a Total Drama favorite by a lot of viewers, he really earns respect by his actions that lead Killer Bass to victory on many occasions. Remember that dodgeball episode? Duncan was top class, coordinating his team and sharing actual tactics which proved that he is the leader of the team and proved that by becoming the Killer Bass member with the highest rankings from Season One to Three. That definitely deserves a credit.

Extraordinary look, piercings all over the body and only that makes Dunkan is the bad-ass of the series judging by his look only, not even mentioning how he copes with the difficult situations that often overwhelm participants of Total Drama. But even Duncan can feel strong emotions as he gets closer with Gwen. Through this curious relationship, we find out that Duncan loves horror movies, enjoys having fun and fooling around with people he really likes.

He is the only male character to participate in four seasons which puts him high up the list of seasoned Total Drama characters and we get to know him really well as the show progresses. He can be unselfish and caring as well as strong and ruthless. He adapts to the situations and that makes us like him even more.

What do you think about Duncan? Were you supporting the guy from the start or does it irritate you when just looking at him? Leave a comment and explain your attitude towards this character, letting everyone know what you think.

He carried a whale and wrestled an alligator. That's damn impressive