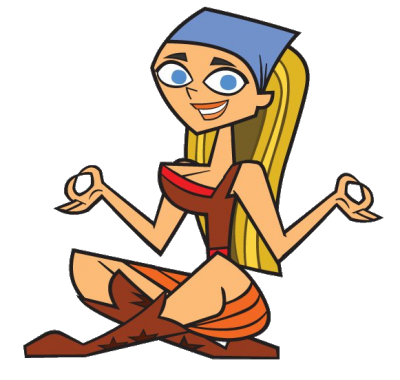 Lindsay has a look of a model, kind heart and acts genuinely though not having much in terms of intellect. A Total Drama favorite of many, she is bright and warmingly satisfying to watch while laughing when she funny embarrasses herself or cheer for her when she faces her problems. She first appears in Total Drama: Island, then Action, World Tour and All-Stars, bringing her character and charisma alongside. Being a very dreamy person she can amuse anyone by confusing everybody’s names and coming up with childish ideas.

There is a negative side of her childish nature as she is easy to be lured into false friendships and manipulated. Heather realizes that potential and forms the first ever alliance of the show with Beth, a girl who would do anything just to look as the person she admires, and Lindsay, extremely trusting girl.

Lindsay knows of her beauty and “Her Hotness” is her favorite nickname, which is totally deserved. As we progress through the series she proves that she is able to solve problems on her own and even win the competitions if need be. She can be true friends with other contestants, help them out and even give pep talks to her team, making the performance way better.

She never won the main prize or even got to the final three, but she still has left a good mark on the show, staying in the fans’ memories for a long time.

What is your opinion on Lindsay? Use the comment section to express your thoughts and vote for the character if you like her!