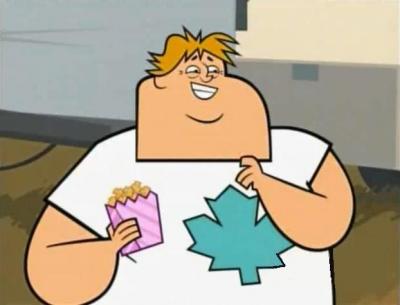 This guy strikes us with his optimistic approach since the very beginning of Total Drama: Island. Alway cheerful, trying to lift the spirits of the others by motivational speaking or just doing clumsy and hilarious things, he truly deserves his label of The Party Guy. Owen appeared in 89 episodes of the show and the majority of them are fun, entertaining and bright, filled with his charisma and positiveness.

He is fond of three things: eating, having fun and … farting. We can witness an ultra combo of Owen running around naked and releasing the gas all over the place.Owen loves a good meal and it costs his team a victory in one of the episodes. Always fighting until the last moment, he earns our respect and admiration.

Even though he appears to be a cheerful and somewhat not very smart, he sometimes gets concerned about his teammates not understanding his true identity and feelings. Owen can experience things on a deep emotional level and takes stress hard, eating all the time to ease the pressure, as he mentioned during the show. He opens up to Heather about his feelings of not being understood and we can clearly see that he is not just a brute with pink clouds instead of his brain, he can also be a very sensitive person. Owen does not pursue the goal of getting rich, but feeling fun and having a good time in the process, which makes him stand out from other contestants. He is smart enough to team up with other participants in order to make the struggle easier. And… he farts, a lot. But we can forgive this little issue for our good old pal Owen, can’t we?>/p>