Family Guy isn't exactly always known for its highbrow quality, what with its emphasis on cutaway jokes, shock value, and pop culture references over plot, it's still delivered some pretty memorable episodes over the course of 12 seasons. In honor of this anniversary, we've selected the 10 best episodes from Family Guy's long run. 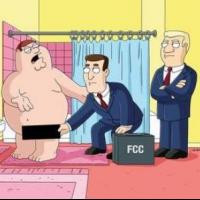 "PTV" is the fourteenth episode in the fourth season of the American animated television series Family Guy. It originally aired on the Fox network in the United States on November 6, 2005. The episode sees the U.S. Federal Communications Commission (FCC) censor the shows on television after a controversial wardrobe malfunction at the Emmy Awards. Peter starts to create his own TV network which he calls PTV, broadcasting classic shows unedited and uncut, as well as original programming. PTV is a big success and Stewie and Brian join him creating shows for the network. Lois calls the FCC to close PTV as she is concerned over the issue of how children will be influenced by Peter's programming. Not only do the FCC close down the network, but they also start censoring the citizens of Quahog, so the Griffin family travels to Washington, D.C. and convince the Congress to have the FCC's rules reversed. 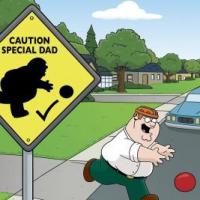 "Petarded" is the sixth episode of the fourth season of the American animated television series Family Guy. It originally aired on Fox in the United States on June 19, 2005. It was written by Alec Sulkin and Wellesley Wild and directed by Seth Kearsley. The episode sees Peter taking the MacArthur Fellows Program to see if he is a genius. However, he performs so poorly that he is declared technically mentally retarded. Attempting to take advantage of the situation, he accidentally hospitalizes Lois while attempting to steal from a restaurant and loses custody of Meg, Chris, and Stewie. The episode's title is a portmanteau between "Peter" and "Retarded"; this title practice would later be used on a couple more episodes, namely "Peterotica" and "Petergeist". Road to the Multiverse

"Road to the Multiverse" is the first episode of the eighth season of the animated comedy series Family Guy. This and most of the Season 8 episodes were produced for season 7. Directed by Greg Colton and written by Wellesley Wild, the episode originally aired on Fox in the United States on September 27, 2009, along with the series premiere of The Cleveland Show. In "Road to the Multiverse", two of the show's main characters, baby genius Stewie and anthropomorphic dog Brian, both voiced by series creator Seth MacFarlane, use an "out-of-this-world" remote control to travel through a series of various parallel universes. They eventually end up in a world where dogs rule and humans obey. Brian becomes reluctant to return to his own universe, and he ultimately ends up breaking the remote, much to the dismay of Stewie, who soon seeks a replacement. The "Road to" episodes which have aired throughout various seasons of Family Guy were inspired by the Road to ... comedy films starring Bing Crosby, Bob Hope and Dorothy Lamour, though this episode was not originally conceived as a "Road to" show. 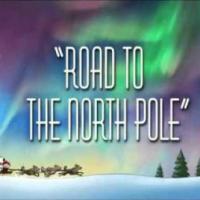 Road to the North Pole

"Road to the North Pole" is the seventh episode of the ninth season of the animated comedy series Family Guy. Directed by Greg Colton and co-written by Chris Sheridan and Danny Smith, the episode originally aired on Fox in the United States on December 12, 2010. In "Road to the North Pole", two of the show's main characters, Stewie and Brian, both voiced by series creator Seth MacFarlane, go on an adventure to the North Pole because Stewie wants to kill Santa Claus. They eventually discover a dreary, polluting factory full of disease-ridden elves and carnivorous, feral reindeer, along with a sickly, exhausted Santa who begs to be killed. Stewie and Brian take pity on him, however, and decide to fulfill Christmas by delivering gifts to the entire globe, albeit unsuccessfully. 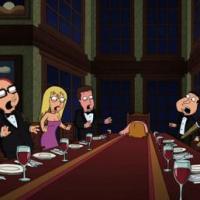 And Then There Were Fewer

"And Then There Were Fewer" is the first episode of the ninth season of the animated comedy series Family Guy. This and most of the other season 9 episodes were produced for the eighth production season. It originally aired on Fox in the United States on September 26, 2010. The episode follows the citizens of Quahog after they are invited by actor James Woods to his stately mansion on a remote island. While there, a series of murders occurs, and the group struggles to determine who committed the mysterious acts, before ultimately attempting to escape from the island, and avoid being murdered themselves. The name of the episode is a parody of Agatha Christie's murder mystery, And Then There Were None. 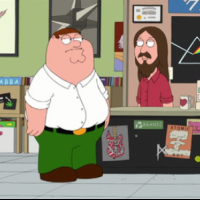 I Dream of Jesus

"I Dream of Jesus" is the second episode in the seventh season of the American animated television series Family Guy. It originally aired on Fox in the United States on October 5, 2008. In the episode, Peter finds Jesus Christ (voiced by Alec Sulkin) working at a record shop, and convinces Jesus to make his second coming.

Directed by Mike Kim and written by Brian Scully, the title of the episode refers to the television series I Dream of Jeannie. The episode makes a prominent use of the song "Surfin' Bird" by The Trashmen. The episode guest starred Chris Cox, Ike Barinholtz, Amanda MacDonald, Niecy Nash, Sulkin and Paris and Perez Hilton. The episode received divided reviews from critics, with the more negative reviews going to the portrayal of Jesus, while the positive reviews went to the "Surfing Bird" plot. According to Nielsen Media Research, "I Dream of Jesus" was Fox's most-watched program the evening it first aired, with 8.4 million views. Seth MacFarlane was nominated for the Primetime Emmy Award for Outstanding Voice-Over Performance and the Annie Award for his role as Peter Griffin in this episode. This was one of three episodes (along with "Road to Germany" and "Family Gay") submitted the year Family Guy was nominated for the "Outstanding Comedy Series". Back to the Pilot

"Back to the Pilot" is the fifth episode of the tenth season of the animated comedy series Family Guy. It originally aired on Fox in the United States on November 13, 2011. In "Back to the Pilot", two of the show's main characters, baby genius Stewie and anthropomorphic dog Brian, both voiced by series creator Seth MacFarlane, use a time machine to travel back in time to the first episode of the series, "Death Has a Shadow". Trouble ensues however, when Brian tells his former self about the September 11 attacks, causing the present to be dramatically changed, and ultimately resulting in a second civil war. The two must then prevent themselves from going back to the past in the first place, but soon realize that it will be much more difficult than they had originally thought. 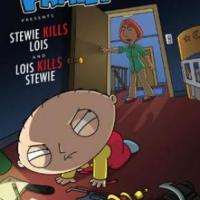 "Stewie Kills Lois" and "Lois Kills Stewie" is a two-part episode of the sixth season of the animated comedy series Family Guy, which was originally produced for the end of Season 5. Respectively, both are the fourth and fifth episode of their season, and they premiered in the United States on Fox on November 4 and 11, 2007. In the former, housewife Lois receives cruise tickets from anthropomorphic dog Brian, and invites Peter on the cruise with her. This upsets Stewie, and he ultimately appears to murder Lois while she is on the cruise, only to find out that she had survived the attack as the year passes. In the latter, Lois is able to expose Stewie as the villain that he is, but he soon accomplishes his dream of world domination. 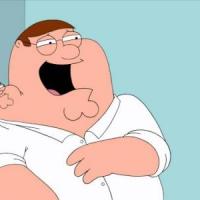 "Vestigial Peter" is the second episode of the twelfth season and the 212th overall episode of the animated comedy series Family Guy. It aired on Fox in the United States and Canada on October 6, 2013, and is written by Brian Scully and directed by Julius Wu. In the episode, Peter finds a strange lump on his neck that turns out to be a vestigial twin, who ends up winning over Peter's family and friends with his optimism and sense of wonder.

When Lois tries getting Peter ready for church, she complains he keeps wearing the same old shirt, and insists that he go to the mall afterward to get new clothes. Trying on a new shirt, the salesman points out a lump on Peter's neck and Lois insists on seeing Dr. Hartman. Dr. Hartman identifies it as a twin and extracts it from just beneath Peter's skin so that it can talk and react to people, as Peter names him Chip. Taking it home, he frightens the kids at first but soon gets everyone to warm up to him. But when Chip wants to live an active life, Peter tries to get him to slow down and Lois objects to him trying to stifle Chip. Chip also gets lucky with Peter's boss Angela and eventually gets on Peter's nerves. Peter goes back to Dr. Hartman and requests to have Chip removed despite possible risks to his own life. The operation is a success and they become separate entities. Despite Peter's attempt to encourage Chip to go his own way, the family insists Chip stay with them. Chip endears him to the family further when he rearranges the home and spends time with the family. Lois points out that Peter was once as full of life as Chip. After talking at the bar about his situation (Quagmire mistakenly thinking Chip was an African child the Griffins adopted) Peter decides to get rid of him and tries to have him eaten by a dingo. While the attempt fails, Chip realizes he is not wanted and leaves. Peter breaks the news to the family and they go search for Chip, leaving Peter alone. Going to the basement, Peter falls down the stairs and breaks his leg due to him wearing high heels at the time. Chip returns and finds Peter, makes a splint for his leg and drags him back upstairs. Peter is grateful for what Chip did and makes up with him. Chip decides to go out in the world and experience it for himself, sailing himself aloft on a balloon. A narration (spoken by Patrick Stewart) states that Chip has not returned to the Griffin family as he became the latest kid on ABC's The Middle. 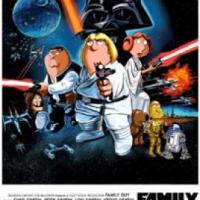 "Blue Harvest" is the hour-long premiere of the sixth season of the American animated television series Family Guy and the first part of the series' trilogy Laugh It Up, Fuzzball. It originally aired on Fox in the United States on September 23, 2007. The episode is a retelling and parody of the 1977 blockbuster film, Star Wars, recasting the show's characters into Star Wars roles. The plot follows Peter as he retells the story of Star Wars while the electricity is out in their house. It was written by Alec Sulkin and directed by Dominic Polcino. To produce the installment the staff asked Lucasfilm, the company who owns the rights to the Star Wars franchise, for permission. Blue Harvest guest starred Chevy Chase, Beverly D'Angelo, Mick Hucknall, Leslie Nielsen, and Rush Limbaugh. The episode also included recurring voice actors Lori Alan, Adam West, Ralph Garman, Danny Smith, John Viener, Steve Callaghan, Kirker Butler, Mark Hentemann, Johnny Brennan, Jon Benjamin, Phil LaMarr, and Wally Wingert. The episode contains various references to popular culture, specifically the Star Wars film series. It was viewed by 10.86 million viewers on its original broadcast and received generally positive reviews from critics.