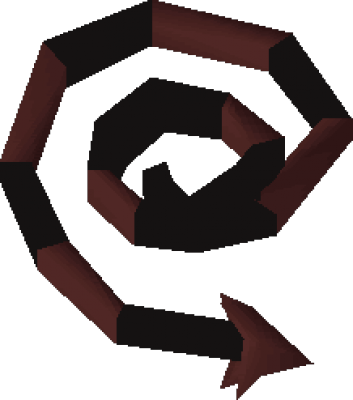 Probably best melee weapon when it comes to the style of wielding it, Abyssal whip is a tier 70 main-hand item. It was introduced at the same time as Slayer skill in 2005. The skill progression proved to be slow and costly and you needed a level 85 to deal any damage to the abyssal demons. This lead to a relatively high price of the weapon which was around a couple of millions of coins due to the aforementioned circumstances and rarity of the weapon. The price has dropped after some time and now you can get the whip on the exchange only for 70,000 coins.

Mark Ogilvie describes the weapon as the spine of any abyssal demon you slay. Your character will need at least 70 Attack to use the item and its benefits of 672 Damage, 1486 Accuracy, and a special attack. The Energy Drain would make the whip hit with 100% of damage and take away all of the run energy of the enemy. Using it would cost you 50% of Adrenaline.

The Abyssal whip is customizable with the help of four paints, which add yellow, green, blue or white touch to it. Though being a main-hand weapon, it will be always on the right side of the character when sheathed. The whip also does not have a proper off-hand counterpart due to animation issues with a player using 2 whips at the same time. Enhanced Excalibur though is used as an off-hand addition to the Abyssal whip. There is also an option to create Abyssal vine whip with the whip vine, dropped by mutated jadinko males and guards and would grant a whole new special attack to the weapon.