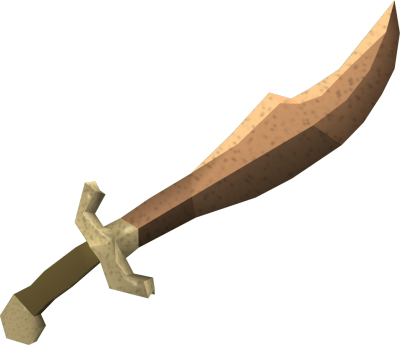 Bronze scimitar is one of weakest melee weapon RuneScape has to offer and officially the weakest scimitar in the whole game. Every other non-quest melee item is also stronger than this one, except for bronze dagger and mace of the same metal. The main advantage of this murder tool is that it can be wielded no matter of the players’ Attack level. It is also one of the starter picks for smiths, as they can forge the scimitar at level 5 with only 2 bronze bars with a total cost of 360 coins.

Being the weapon for the beginners, it does not have much to offer in the way of stats, offering 48 Damage and 150 Accuracy. No comparison to the legendary items, right? Despite a status of a weakling, the scimitar is a veteran of the game, sometimes being older than the players of the younger generation that have discovered RuneScape. January 4th, 2001 is a reasonable date for a debut in the game, making you respect the thing just for hanging around for that long.

The weapon can be obtained from a number of drop sources, including orcs, pirates, dried zombies, goblins etc. You can take the shorter route and get it at Grand Exchange for a price of just 334 coins. In-game markets, however, offer the bronze scimitar 10 times cheaper, charging 32 coins. If you decide to disassemble it, you will most likely get just junk, because of the 98.9% junk chance. Maybe if you keep trying, the god of random will eventually present you some sharp or subtle components with 3% and 2% chance respectively.